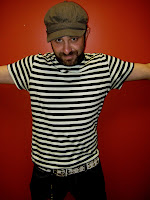 I can't decide who Matt looks like most when he wears his striped shirt.

3. A turn-of-the-century French child
Posted by ronckytonk at 8:43 PM No comments:

Jimmy "it could happen" Acevedo 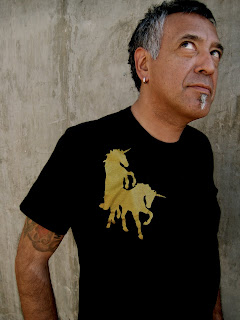 Posted by ronckytonk at 9:54 PM No comments: 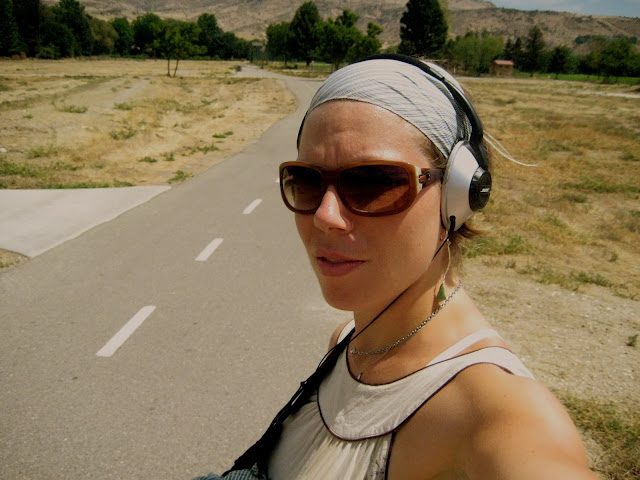 Hi! I am looking serious for no particular reason. I was happy to be in Idaho, glad to be walking along the Boise River greenbelt, and pleased as hell to just be outside. Plus I'd just seen a two-headed calf. 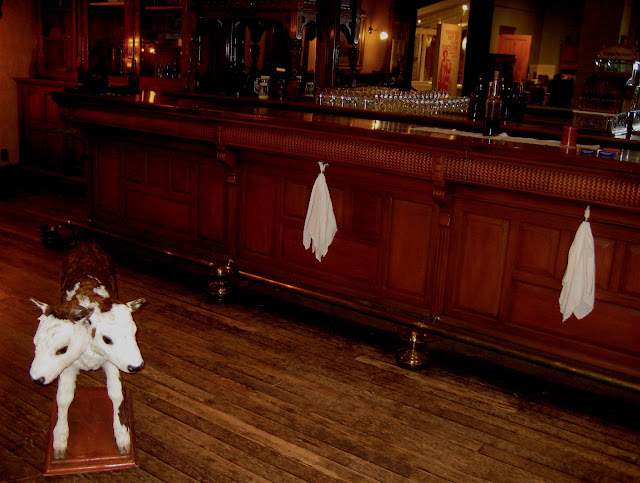 The calf AKA the eighth wonder of Idaho was born in 1950, lived for 5 days and was donated a year later to the Idaho Historical Society, where it now stands in the center of a saloon. Because calves  and saloons, obviously.

I walked to the Historical Society from the hotel and fished around in my bag for the $2 entry fee. "I like your head scarf," said the lady behind the desk.

"Did you get it at GODDESS FEST?"

"Oh, it's over there in the park," she replied, "Just a bunch of hippies."

At which point I considered going, "DAMN HIPPIES," just for fun but instead said, "I'll have to check that out." Which I did, and on the way I couldn't help but notice the enthusiastic Boise Library. I'm not typically a fan of exclamation points but this one? No problem. Over at Goddess Fest I found the usuals: jam bands, lots of Native American-themed tattoos, merchants selling flowy Nepalese garments, and enough patchouli and incense to drive a perfectly well-adjusted individual com-plete-ly over the edge. 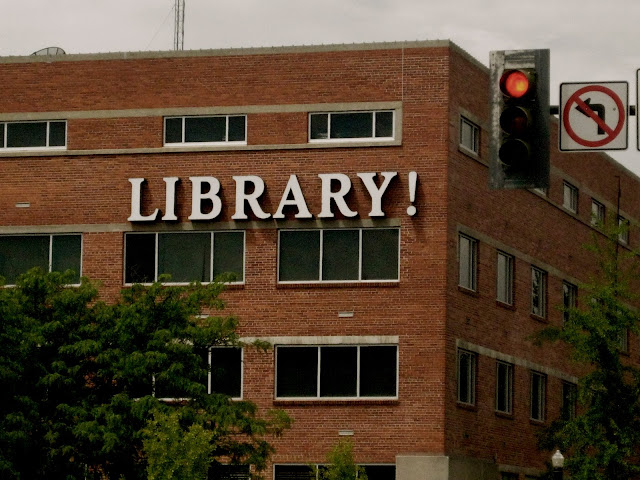 Posted by ronckytonk at 12:44 PM No comments:

I don't know when I started flushing public toilets with my feet and worrying about my toothbrush getting blasted with shitspecks in the bathroom but I do both of these things now. I plunge the toilet when necessary but don't enjoy it and I sort of want to shower afterwards (shitspecks). I don't think I'm a germaphobe because I ride the subway and fly in planes without surgical masks and gloves though I feel a little bio-hazardous until I wash my hands.

Don't get me started on people who let their cats climb on the kitchen counter and hop in bed with cat shit hanging off their bottomholes. Just, no. So it's pretty unlikely that someone was able to talk me into getting a colonic AKA colon hydrotherapy AKA colonic irrigation. I GOT MY ASS IRRIGATED. I don't even like passing gas around friends; how was I to make that transition to hopping up half naked on a table to stick a tube up my butt and let a stranger fill me up with water so that she could massage my belly and push my shit out? An make little comments how how it looked? Hm?

Yeah. Here's the thing. I imagined that someone would tell me, or at worst show me, how to place the tube in my booty and then leave me alone. I would be in a room by myself, privately emptying my bowels to some sort of soothing and ambient background noise, something aquatic involving waves or burbling rivers or dolphins. I really didn't expect that I would be simultaneously trying to hold up my end of chit chat while also concentrating very hard on not taking a big dump all over this person I just met. I know that's not supposed to happen but they put a square of paper padding under your rear end so, whatever, you know there's potential there.

I played along but at some point I was like, "ALRIGHT, enough of this get to know you routine, you've seen my butthole like three times now." 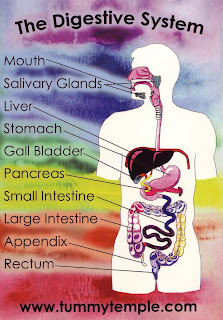 This may have been when my hydrotherapist noticed I was staring very intently and silently at the digestive system poster on the wall.

"Does the machine bother you?" she asked, pointing to the clear tube where a turd of mine was floating past.

"Most people can't take their eyes off it," she shared.

Which I thought was just another example of how Seattle can be so lovely, yet get on my last nerve so easily. But something happened by the end of my session. I'd experienced a bunch of stages: nervous sleeplessness the night before, apprehension that I wasn't hydrated enough and I shouldn't have drank 6 pints of Manny's Pale Ale and sullen pouting over waking up at 7am to go do THIS. Right before my appointment, in the Tummy Temple lobby, amongst the Buddha statues and Tibetan prayer flags and "quiet zone" signs, I shared a crazed, uncontrollable, snorting fit of laughter with the person I'd gone there with, another first timer. He actually laughed so hard, he cried, and forbade me from looking at him.

In perhaps the last ten minutes of my colonic, however, I started feeling less horrified by the situation. Maybe it helped that there was less pressure in my shitless belly. I felt nice and empty, if a little overexposed, and I was getting used to the idea that the girl sitting next to me, the one who seemed so happy for me, was just doing her job and is really used to this shit.

Here's what another person thought.
Posted by ronckytonk at 3:25 PM 2 comments:

There's lots of things I've appreciated on sticks before - juicy flanks of steak (Thanks, Ecuador) and corn dogs (Thanks, every state fair I've ever been to) - and generally speaking, I believe that the greasier and more unwieldy something is, the more it belongs on a stick. By that reasoning, funnel cake on a stick would be the apex of what I'm going for.

Whereas the image of my own head wasn't even a close second. Unwieldy? Hell yes. Greasy? Hm. What exactly were Jane and Seema trying to say when they made faces on a stick of me, Cathy, and Frank while staying at my house this past weekend?

I think they just really miss us. 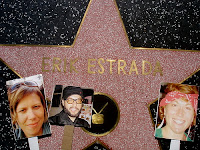 And did they realize that Erik Estrada is my favorite celebrity? Why?

2. His psychic network commercial in the early 90s 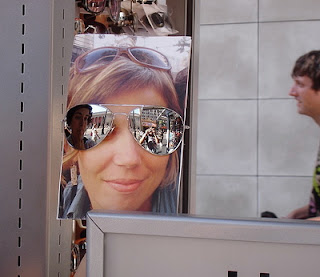 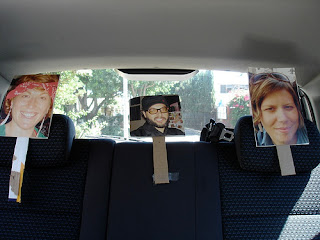 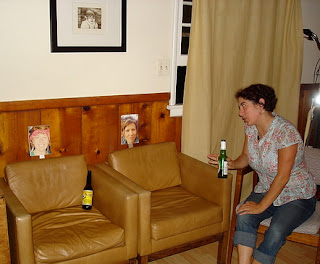 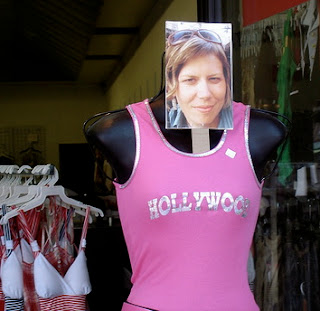 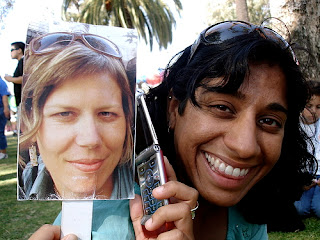 face on a stick 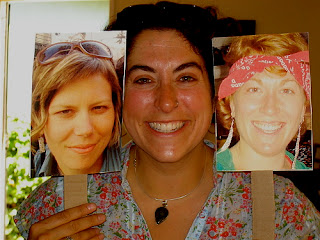 When I saw this, I knew it was going to be bad.

But really I had no idea.
Posted by ronckytonk at 2:03 AM No comments: 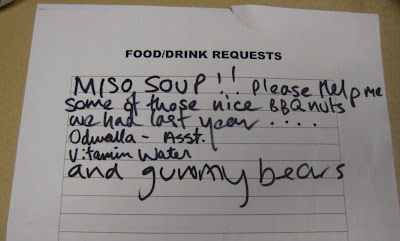 Last summer, around week nine of the tour, Geoff started ordering miso soup for the bus because he couldn't take another cold onion ring at midnight. This year it's taken a whopping fourteen days for Geoff to break up with fried food. It happened in Birmingham after he got on the bus and saw the big pile of soggy Chick-fil-A sandwiches littering the table.

He left a note on the food request list pleading for miso soup and has since been shunning carbohydrates unless it involves english muffins, Marmite, or beer. I, on the other hand, am hanging in there with the fried carbs. I did, however, walk across the street this morning in 112 degree Phoenix heat to buy a Pilates DVD. I did Pilates for an hour once and it seemed alright. Definitely better than yoga since the only part of yoga that doesn't bore me is when I fall asleep or get to admire the tattoos of whoever has their mat is in front of mine.

Tonight I thought it would be funny, considering his new diet, to put a Pop Tart on Geoff's computer and then run out of the room. I had made it only a couple of steps when I heard a strangling noise coming from the office behind me and a THWACK of something hitting the cinder block wall next to my head. I turned around, impressed.

should have been my bday cake in high school 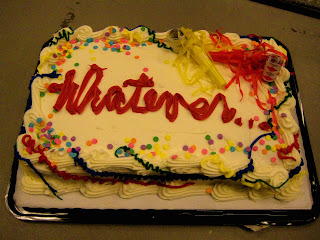 Because sometimes you just don't need a reason.
Posted by ronckytonk at 11:59 AM No comments: 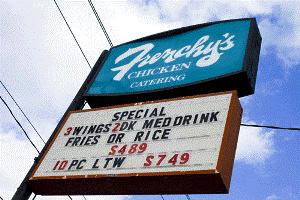 Walk-up window, no call-in orders after 6pm, no bills larger than $20.

I sent Mario, our show runner, to Frenchy's for three buses worth of food orders at the end of the night because I didn't know about the $20 rule. He returned with only one order because Frenchy's wouldn't accept my hundred dollar bill. This is crazy to me: a business that will take a little money from you but not a lot.

With hungry people waiting on the other two buses, I sent him back armed with 1's, 5's, 10's and a sign in his car window letting venue security and local cops know they should let him through the throngs of fans crowding the building. Mario had a job to do and that job was bringing chicken to the American Idols.

An hour and a half later I called Mario to check in. "They're almost done with your order!" He yelled above the background clamor.

I'd hoped he was making his way back. Frenchy's was only three miles away but the crowds were bad, our bus drivers were ready to get on the road, and people were grumpy.

"Yeah, this place is slammin'!" Mario screeched into the phone.

When Mario pulled in at midnight, I grabbed the boxes of chicken and started flinging them on the buses. Then I basically shoved Mario down the loading dock incline towards the offices backstage and told him to find the promoter who'd give him a check for his work. I later regretted not thanking Mario properly because he'd been very sweet and kind of awesome all day long.

I'm sorry, Mario. I can be an asshole when I'm in a rush.

I got on the bus, drunk on fried chicken stress and several bottles of Sierra Nevada, and accepted a piece of Frenchy's. It was so good that when a sliver of chicken skin slid off the piece in my left hand and into the styrofoam container of collard greens juice in my right hand, I considered drinking it.

"Oh my GOD, this is delicious," I said. I might have licked the chicken. Just for a second. "It's like a fried chicken popsicle," I said. At this point people stepped in.

Martin Luther King, Jr. and his father were both pastors at Ebenezer Baptist Church.

Martin Jr. was baptized at this church and it's also the site of his funeral. It is now the site of where a needlepointing lady in a ranger uniform invited me to feel free to sit down in a pew and listen to the recording of Martin Jr's voice for a nice long time.
Posted by ronckytonk at 7:27 PM No comments:

hey y'all from Tennessee 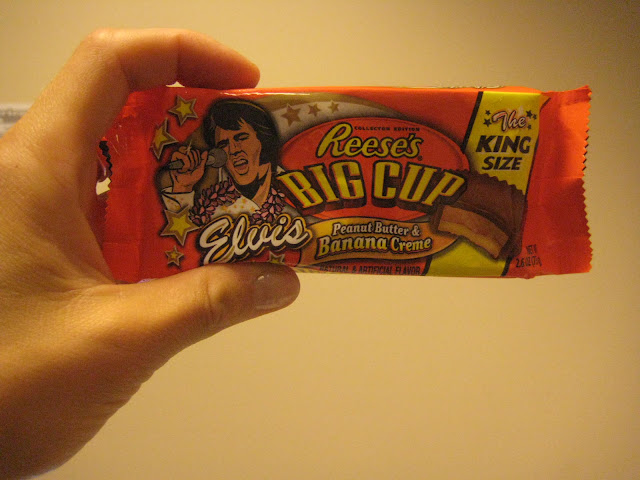 plus special hey y'all from hollywood
Posted by ronckytonk at 1:30 AM 1 comment:

Paul Potts tears it UP

Yes, reality television is rotting our brains, reversing evolution, and destroying our individual and collective imagination, but can it be all bad if it can bring us this? I've watched this clip three times and it keeps making me blubber happily.
Posted by ronckytonk at 5:33 PM 3 comments: