Since when do reporters on the radio describe traffic on the interstate as a HOT MESS??
Posted by ronckytonk at 2:08 PM 4 comments:

You know the feeling. You're all rough around the edges that day and someone does something sweet and nice and you have to smile because they have great timing. I like that feeling. Thanks Halle. 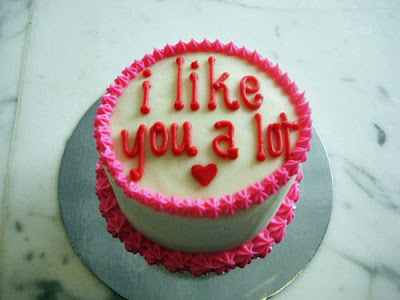 Matthew emailed me this card in April 2008 when I was in Berlin. I was sitting in a cafe and I got all embarrassed, flushed, and silly-tingly when I opened it and saw what it said: Someday I'd like you to be my emergency contact person. 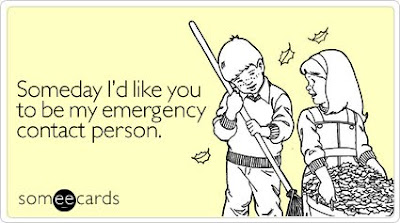 I was alone, quietly and happily freaking out. Emergency contact person! Does he realize the IMPLICATIONS of this ecard? Does he know what he's saying? This is serious. A lot of people say a lot of things they don't mean but Matthew didn't seem like that so my heart beat rapidly, my crazy crush swelling.

I keep thinking of this card because I JUST WROTE HIS NAME AS MY EMERGENCY CONTACT PERSON. That's what happen when you decide overnight to get married in Vegas! 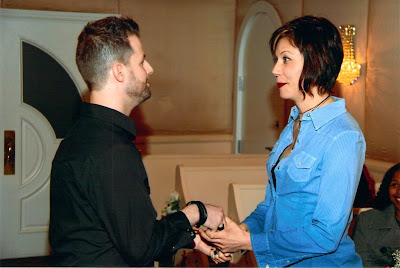 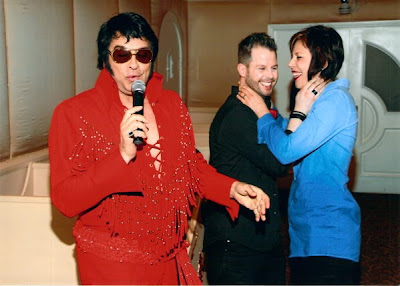 Do you like how we look like we're choking each other in the second photo? Yeah, me too. Married for 28 seconds and already at each others' throats.

Here's the thing about marriage, because I'm an authority after 47 days. There is this whole paperwork side to it, which DUH. It is a civil contract after all. Thankfully, when a lot people do it now it is for love but technically, and in the eyes of the law, that is whatever. And the religious aspect? Equally whatever. Which is why it's funny when people get all high and mighty about their precious, sacred marriage for religious reasons: Marriage didn't start out that way and it doesn't seem to be ending that way either. Legally it's all about finances and assets and insurance and the right to do this and that for and to each other. It's totally not romantic. Romance and/or love is what we MAKE it.

I'm going to steal something now from Robert Louis Stevenson and Elizabeth Gilbert:

MARRIAGE IS A FRIENDSHIP RECOGNIZED BY THE POLICE

I'm really into picking apart what marriage is, and has been, and will be. Because it has been evolving since its inception and I'm sure it can be something different for every person and couple and I'm sure that I don't want to fall into some way of being just because I'm married.

I read a post on Offbeat Bride that I liked about people dangling their ideas over you, sort of daring you to be different but mostly begging you not to be. It's over here.

By the time M and I got married - and will get married again in May with friends and family - we'd done some long-termy type of transactions like buying a car and a dog together and were already investing in each other. Plus we've been living in sin for a year. We'd said many times that we already felt married and had - and this is significant, or not - changed our Facebook statuses to married. If the Internet is involved, it's ON.

Side story: Right after he and I met, he web-searched me and found my old Friendster page. Friendster said that I was in a relationship and he got all pissy and interrogated my cousin who introduced us. She assured him that I hadn't checked Friendster in a trizillion years, just needed to update my account, and wasn't a skanky liar on purpose.

Speaking of the Internet, I was afraid to tell my parents about Vegas for three weeks after Elvis walked me down the aisle while singing Love Me Tender. It started when Matthew and I got back to Mandalay Bay and were waiting for a bottle of tequila to arrive and he sent a mass text to his friends that said something along the lines of I'M MARRIED!!

"You do realize you're friends with my dad on Facebook, right?" I said.

His follow-up mass text was more or less "Keep it on the DL for now, no Facebook".

Once I got up the nerve to break the news to Mary Ann and Bob, they LAUGHED. Too bad I shit a river imagining painful, guilt-inducing reactions on their part, revolving mainly around the theme of why were they paying for so much of a wedding in May when we were just going to make a mockery of the whole thing at the Graceland Chapel where Jon Bon Jovi was married.

Nope, they thought it was funny. I have got to start giving them more credit.
Posted by ronckytonk at 5:24 PM 2 comments:

You say tomato, I say fuck you. 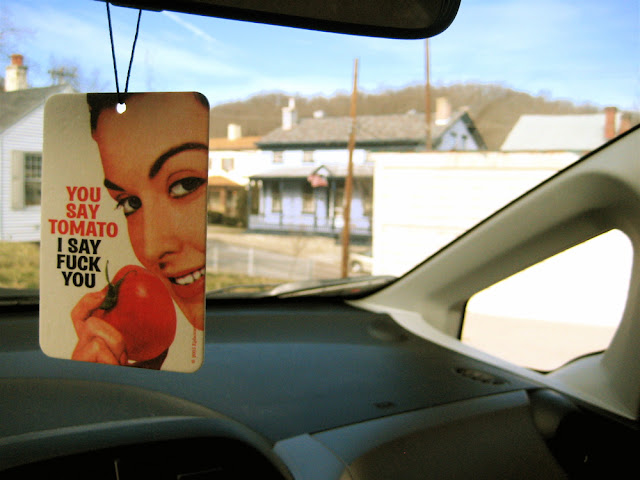 Exhibit A of why late Hanukkah presents rule. Thanks Jane.
Posted by ronckytonk at 2:59 PM 2 comments:

About the girl in the convenience store next to my laundromat who said to the woman behind the sandwich counter, "I'm TRYING to UNDERSTAND how you could only put mayonnaise on one side of my sandwich..."

And when the woman gave her two packets of mayo, "This sandwich is DRY AS SHIT."

I played it cool and avoided eye contact because I was afraid a) that I would laugh and b) that she would punch me in the throat.

I ordered my own sandwich, went back to the laundromat, and was eating it when the girl walked in with her friend, "And I SAID, you don't know what to do with BOTH PIECES OF BREAD?"

That is a sandwich gangsta.
Posted by ronckytonk at 8:21 PM No comments:

Labels: are you f'in serious?, Kentucky, laughing quietly to myself

on hold with Disney

I'm on hold with a Disney office right now and the music is FREAKING ME OUT. It is way too early in the day to feel like I'm tumbling and skipping through a meadow of giant magical mushrooms. I haven't even taken a shower.
Posted by ronckytonk at 11:34 AM No comments:

Labels: are you f'in serious?, work

Monica and her pumpkin cake 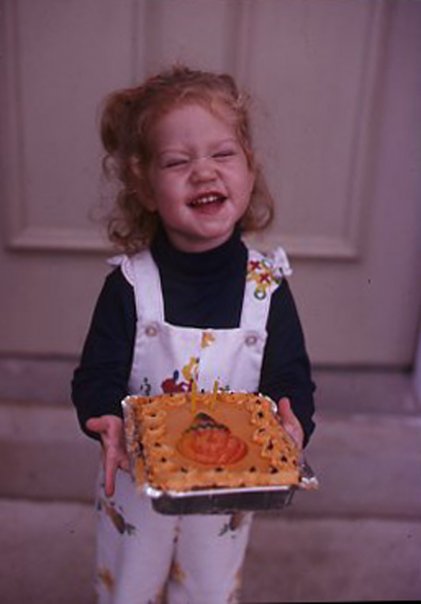 Hi Monica. Whatchu got there?

Now.
Posted by ronckytonk at 4:23 PM No comments:

I smell like vanilla from the care package I got from a perfect stranger!

A few weeks ago I was faxed an invoice that was supposed to go to someone else. It sat with me for a couple of days until I remembered how vexing it is to be stumped by a stupid, simple detail like YOU SENT THE FAX and you're telling everyone I SENT THE FAX but what you don't know is that the fax escaped to the wrong place.

So I called the number at the top of the fax and asked for the sender, Lisa Monroe. A man told me that I'd called a shipping company and that Lisa is their customer. I explained why I was calling and he looked up her cell. I called and left her a message, la-di-dah good luck end of story.

Except! Lisa took a minute to call ME back, thanked me nicely, and then informed me that she works for Bliss and what scent do I like? 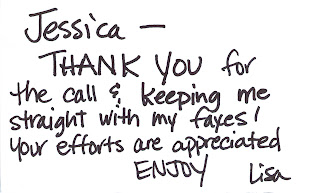 And I can't even explain how buffed and buttery and exfoliated I feel right now. I stink real nice.

The last thing Lisa said to me on the phone was, "See, integrity pays!" She was so sweet about thanking me, it was all I could do to not send her a present to thank her for thanking me.

Right before I decided that my float on the karma parade was getting a little silly and I'd just stick to keeping my elbows moisturized and appreciating nice people.
Posted by ronckytonk at 5:48 PM No comments: