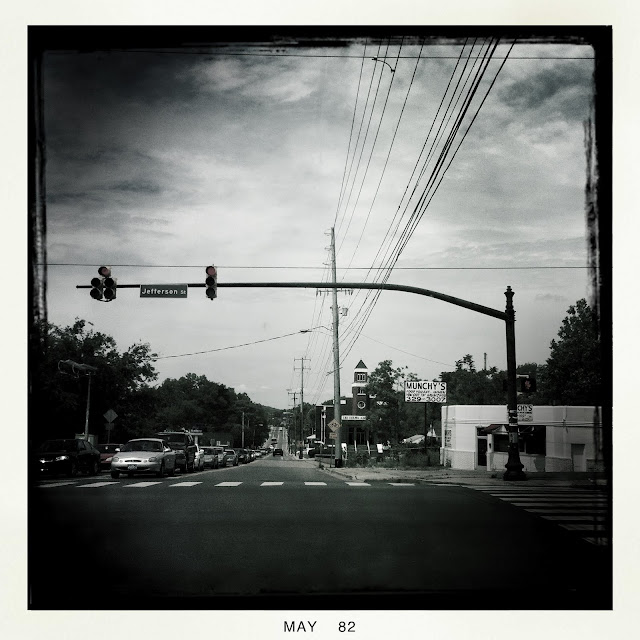 Ever since moving to Nashville I've wanted to do a photo project of the signs on Jefferson St. but haven't yet made the time to to walk the street and document the awesomeness so I have just one right now. This below - for Munchy's - is the original, the first sign I saw in the neighborhood when I was in Nashville for work before we moved, driving around with no idea of where I was. That time, and often since, I was compelled to read it out loud in a voice deeper and more male than my own. It's almost a growl. If I'm driving with Matthew, he'll chime in. 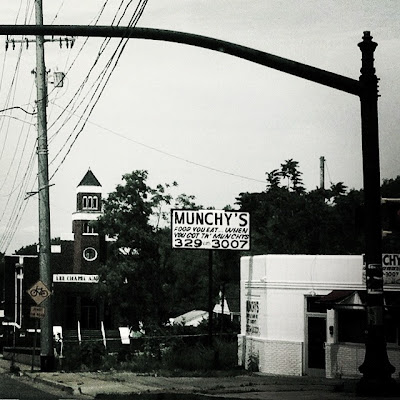 Posted by ronckytonk at 12:19 AM No comments:

A friend gave Matthew a giant rap and hip hop mix which we've had in the car and the first time we drove around Nashville listening I was cracking up, hard. A few choice lyrics that really did make me laugh from Wallpaper, Spank Rock and Tyga are below. When I listen closely to the whole songs though, and pay attention to all the words, I get bummed out because they're often misogynistic and stereotypical. Peaches, on the other hand, I LOVE. She, too, is crude but she's creative and sticks tired old gender norms up her a-double-s.

"I got ya grandma on my dick" - Tyga, Rack City

Note: I've never felt older than when I just Googled ginch. I was pretty sure I knew what it meant due to context clues but I wanted to be certain. And yea, I was right.

"I think your mac needs a lot more ram / be my Moog and I'll twiddle your knob / be my corn and I'll nibble your cob" - Peaches, Hit It Hard

I'm a little ambitious / and I want my wishes / so I gotta fuckticious / Sid Vicious / doing all my dirty dishes" - Peaches, Bag It 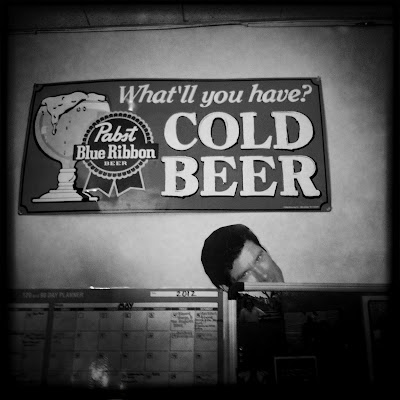 Hoff sighting in a LA promoter office yesterday. This post is dedicated to Neil Rinden, with whom I recently had a text conversation based on the premise of someone overdosing on Zoloft while pregnant with siamese quadruplets fathered by David Hasselhoff. I DON'T KNOW, I THINK I WAS TIRED.
Posted by ronckytonk at 6:34 PM No comments:

"I wish I brought gold stars," our new tax accountant said. She was sitting in our living room, going through my piles of paper, receipts that were scanned, blown up to 8x10, and separated by category. "You're so prepared, you're making my job easy." I wasn't sure I heard her right but wanted to hug her, just in case.

This time last year my stomach was a mess of nerves from letters we got from the IRS and emails from our tax accountant. We owed XXXX to the state and XXXX to the feds, totaling approximately XXXXX more dollars than we had in savings. We signed paperwork pledging our intention to begin the government payment plan at a frightening interest rate and called the IRS to make sure we were doing everything correctly - their letters are dense and minimally readable to us, two fairly literate people. The woman on the phone warned us. We'd get snowed, she said. It'd be better to take out a bank loan and pay the bank back over time than owe mounting sums to the government. I wanted to puke.

But we were so lucky. Yes, we'd moved across the country from a cheap state (KY) to an expensive one (CA) thinking that it would be better for my job. We'd decided that it was worth my husband quitting his job, not realizing how hard it would be for him to get another library position, and we were paying far more money in rent and insurance and just about everything except for gas since we walked (me) or skateboarded (Matthew) to most places in Oceanside. We were lucky because even though we'd blown our money, tax season was just a few months before my work season so within a few months we'd be able to start turning my paychecks over to the IRS to get out of debt. This was by no means a fun process but it was doable because I earned the majority of my income in the summer. With most jobs, that would have been impossible. Of course, the job I have now caused the problem in the first place.

The only time in my life I've known exactly how much money I made was when I had a fixed salary publishing job. I was the representative for our union there for awhile and signed off on paperwork lobbying for tiny raises, amounts like $10 a week that didn't affect anyone's lifestyle or livelihood. Drinking money, we called it. At every other point, I worked for cash or several jobs at once and the yearly total fluctuated wildly so I just always lived within my means, whatever those means were. Without a clear concept of how much I made or needed to make, I just lived simply and saved enough to do things I wanted without worrying. I realize now what an enviable position that was even if I was never rich. I always got a small tax refund back at the end of the year and didn't give it much more thought.

In the past few years, however, a series of misfilings and underreportings kicked off my tax problems. Without directly causing the problems - I didn't know not enough taxes were being withheld and didn't know important documents hadn't been sent to me to file - I still wasn't savvy enough to catch anyone's mistakes. I'd had friends tell me to start tracking deductions but I never quite understood what that meant and how much it would benefit me so I continued to hum lalalala in my head while they gave me advice. I do have to take responsibility for being that willfully ignorant. When the IRS letters started arriving in the mail, I panicked. I was stressed and felt stupid and in that state fled to the self-help aisle in Barnes & Noble.

HOW TO BE A GROWN UP: THE TEN SECRET SKILL EVERYONE NEEDS TO KNOW

This book reminded me a lot of something I would be terribly embarrassed to buy. I had to take off the jacket cover because I couldn't bear to see Stacy Kaiser smiling at me, head cocked to the side with her perfect hair, perfect eye make up, perfect teeth. Perfect grown up, unlike me. The book's blue binding, stripped of its cover, sat on the bookshelf next to my bed and I looked at it from time to time and thought about how I should read it. I tried, once, and walked away aggravated. I'm not saying it's a bad book; I didn't read enough to fairly judge it. I just wanted to unlock the secrets of taxes not take a quiz on whether I was a "fully loaded" adult overall. I donated the book to Goodwill and went to the public library where I checked out J.K. Lasser's 1001 Deductions and Tax Breaks 2011: Your Complete Guide to Everything Deductible. Woo! Down the street to Pierview Coffeeshop I went to drink a gallon of coffee, read the entire book, and type up ten pages of notes.

When we moved to Nashville I got the name of a local tax accountant who's familiar with music touring from the business side. I'd been saving receipts all year: moving expenses, business purchases, health care, phone bills, charitable donations. The weekend before she made her house call to us - An accountant who comes to you and then fills your ears with praise? Yes please! - we went through everything and got out the scanner, printer, paperclips, highlighters, and post it notes. Then we waited with a certain amount of dread. Helene showed up, sat on the couch, and spread everything out on the ottoman. She asked us good questions and gave us good info. When she left, I had a moment. "She gets me. She gets us!" It was more or less ridiculous. What wasn't ridiculous is that we broke even and Helene charged us less for her work than her initial quote. Because I made her job THAT EASY, I'd like to think. Thank you J.K. Lasser, maybe next time How To Be a Grown Up.

Posted by ronckytonk at 8:59 PM No comments: