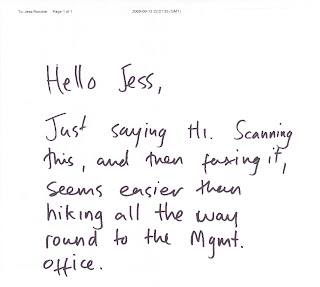 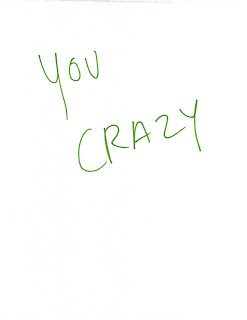 Posted by ronckytonk at 11:50 PM No comments:

About how you know you're jumpy when the light from the setting sun scares you because you think it's a police car about to pull you over.
Posted by ronckytonk at 11:45 PM 1 comment:

I was on my way to Trader Joe's when two girls with arms slung around each others' shoulders said, "Happy Pride baby," as they passed. I responded with a big ole, "You TOO!"

I bought my groceries, walked back out onto Santa Monica Blvd and into the oncoming traffic of Dykemarch. Standing on the sidewalk with my bag of microwaveable Indian food, tofu cream cheese and wine, I smiled like an idiot to the girls and boys in the street while a guy on my left shouted "POWER TO THE V! POWER TO THE V!" V being vagina. I thought of the world's best impromptu road trip to San Francisco Pride with Halle in 1997 and a notable runner-up, driving from San Francisco to LA with Sara in 2001.

Sara and I stayed one night in a San Luis Obispo youth hostel. All I remember from the hostel was a French woman with a wandering eye AND coming home so drunk that Sara spent some time laughing on her hands and knees in the garden. Sara claimed later that she was praying and she might have been, but that's not how she got down there in the first place.

We had come from a dance club where Sara befriended someone we named Poet Shirt for his flowing blouse. It billowed around him on the dance floor, a happy mambo cloud. Sara was impressed by Poet Shirt's professional dance shoes and claimed afterward a sudden need for her own professional dance shoes. Sara and Poet Shirt danced and Sara and I danced and we were having fun, making each other laugh, when a woman (possibly the French woman with the wandering eye, I honestly can't remember) told us that it was so refreshing to see young women behaving the way we were, that most girls today are so LASCIVIOUS.

And believe me when I tell you that the only thing lascivious was the way that she pronounced LA-SCIV-I-OOOUS, dripping with the dictionary definition: x-rated, carnal, suggestive, wanton.

She seemed to assume that we were a romantic couple who, thankfully in her eyes, were not simulating sex on the dance floor. In fact, we weren't a couple unless you count a couple of straight girls who like dancing but more importantly WHO CARES. And that's what I thought of on the sidelines of Dykemarch through West Hollywood. Who cares??? If someone really, truly feels like they need to be married then they really, truly should be able to do so. Who cares who they do it with?
Posted by ronckytonk at 12:40 AM No comments:

Riverdance vs. The Librarian

I was just sorting through emails and found a video that I forgot I had because I'm a stupidass.

Matthew playing records at my going away party a hundred million years (three weeks) ago. Oh, and the voices of people talking in the background. My friends, the ones I haven't called in three weeks.

Then, you know how You Tube lists "Related Videos" that you might want to check out? It offered RIVERDANCE as a Related Video to Matthew on the turntables. Uh, what?

Did someone tell You Tube that Anonymous and I went to Riverdance with my parents right before I left town? And that Anonymous was mildly concerned about being spotted and getting a reputation as a Irish dancing enthusiast?

And that although both he (or she! you don't know who it is!) and I agreed that it was a tad repetitive but less hokey and more impressive than we expected, I got a vicious case of giggles the first few times the lead guy came on stage. He is just so bouncy. And erect. And I know that you can't exactly SLOUCH while Irish dancing but his posture plus my immaturity made it difficult for me.

Thank you, You Tube, I had forgotten about that.
Posted by ronckytonk at 12:24 AM No comments:

I've been meaning to mention this but every time I think about it I get depressed: I was at the same party as David Hasselhoff and didn't see him.

He likes American Idol and was at the finale party. There were also a lot of other people at the party and it was dark and there were palm trees and lots of places he could have hidden when he realized there was a lunatic looking for him.

Geoff texted me that he saw the Hoff.

I found Geoff and demanded to know where.

"Over there," he said, waving vaguely.

"You do realize that this is the only person who'd make me act like this?"

Geoff laughed. He may or may not have believed me.
Posted by ronckytonk at 2:00 AM 1 comment: