fun ways to hang out from afar while on the road 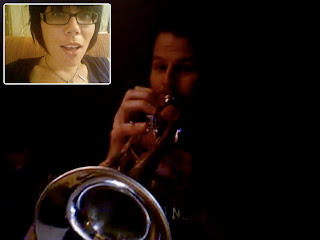 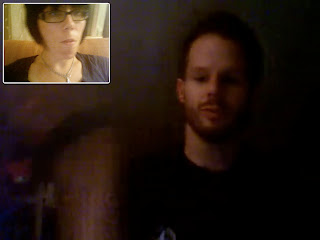 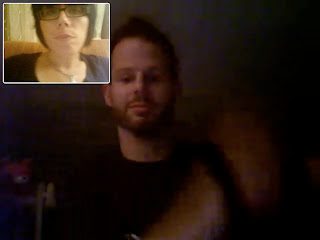 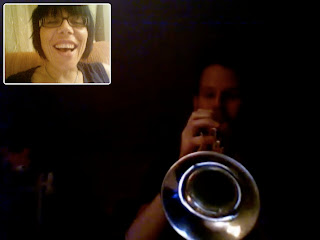 I hate my BlackBerry

I've caught myself typing on my BlackBerry in the following places:

3. Behind a pillow during takeoff, hiding from the flight attendants.

I want to wave my arms around and protest, "No, I'm not that person!" but I'm too busy on the Blackberry. Sick.
Posted by ronckytonk at 10:45 PM 1 comment:

Labels: are you f'in serious?, work

Do not F with tour management. We will sing Teddy Bear in your FACE. 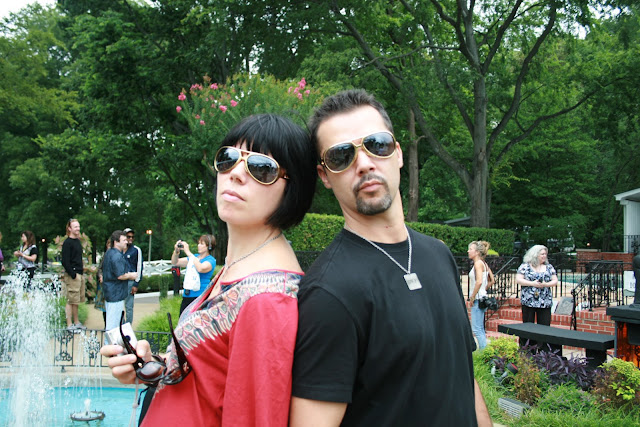 I can't wait to get home to tell Matthew that what our living room needs is little more Elvis and immediately start shopping for Monkey statues. 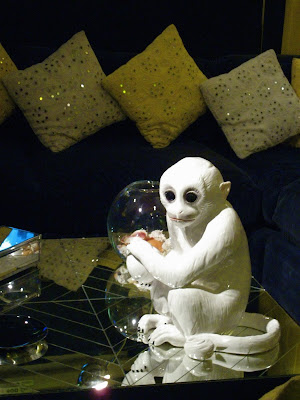 Labels: are you f'in serious?, art, the South

1. A huge piece of chocolate in the shape of Texas.

2. A fishbowl. I invited Monica over to drink wine in my Portland hotel room and she showed up with a fishbowl. She saw it sitting in the hallway and picked it up. The fish lived with me for five days. Apparently housekeeping fed it because I didn't.

3. A robe with my name embroidered on it.

1. Lit the hotel bill on fire on the tour bus.

2. Spilled coffee all over a hotel sales manager.

Best use of sarcasm used against me:

I went to the eye doctor in LA and sat in the chair with tears streaming down my face because my eyeball stung, hurt, throbbed and burned. "Well," said the nurse, "At least it doesn't itch."

Best snap decision made on the advice of others:

Canceled the rest of the day's rehearsals when Michael Jackson died.

Everyone stopped what they were doing. Publicists paced the hall and called other publicists. People who knew people working on the MJ tour made phone calls. No one knew whether to believe TMZ because in general they are such shitheads. People in a daze. Death confirmed. Rehearsals canceled.

Sara texted that she felt such sadness. "Dude," I wrote back, "I just had to cancel the rest of today's rehearsals." She asked me if there is a page for that in Tour Managing for Dummies. Chapter 12: Dealing with the death of a music legend.

Later I remembered walking down Duncan Avenue in 1983, looking at a Beat It MTV card of Michael in his red jacket.

Most consistent homicidal urge that I can't rid myself of:

I drove the rental car to the Portland arena with Kevin, Ray, and Ricky. We stopped at an intersection in front of Chinatown and a woman passed in the crosswalk.

"Do you ever want to run people over? Have to will yourself not to hit the gas?" I asked. "It's my only homicidal urge," I said, "Well, my only consistent one." The light turned green and a man wandered into the road in front of me, oblivious.

Awake at 4 am to fly from Salt Lake City to LA for the Conan O'Brien show. This would be fine if my head wasn't going up in flames starting with my eye socket and there's a mix-up with ground transportation to the airport. I'm on the phone with dispatch, holding my eye with my left hand and the phone with my right yelling, "This is UNACCEPTABLE!"

Despite the fact that it is unacceptable, we get to the airport just fine. I have Allison's show wardrobe in my bag which makes me three pounds overweight. "That'll be 90 dollars or you can take three pounds out." "I'll pay it," I say. The flight agent looks at me,"It's only three pounds..." I look back with my good eye, the other squeezed shut, "I'LL PAY IT."

In LA I skip Conan and go to the eye doctor. I have to wear clip-on shades in addition to my prescription sunglasses.

Wake up in Memphis. Go to Graceland. I don't know I'm an Elvis fan until I get to Graceland. Am wound up for like nine hours afterward. Kevin and I play Elvis in the office and sing along to Teddy Bear. After Memphis show, fly to Tampa in a little jet. I sit in the cockpit, wear a headset, listen to the pilots, and talk to them the whole time. They show me how to fly and now I kind of want to be a pilot.
Posted by ronckytonk at 2:21 AM 1 comment: