Hosts of a recent party at Bubba's Sulky Lounge in Portland, Maine, these boys who normally come off as innocuous as a couple of fruit flies - if fruit flies wore Hawaiian shirts, Mexican guayaberas, and comfortable sneakers - were pimped out in unrivaled fashion. 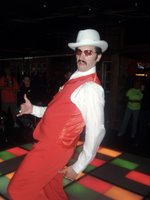 I had no problem sitting at a table with a sign welcoming bitches and hos and not once did I feel my integrity compromised.

And I didn't even come close to busting out lyrics from 'Pimpin' Ain't Easy':

If the girlies want my tip they gotta pay a fee -  I love bonin', and all my friends they will agree -  that when it comes to pimpin' hoes - it ain't easy -

I wanted to tax that ass like the government!  Well, it's Friday night, ain't a damn thing funny -  Bitch better have my money -

YEAH. Maybe because John and Andrew really aren't pimps and while I may be a bitch from time to time, I'm really not a ho. Therefore, ha ha. Good party. Thanks guys. 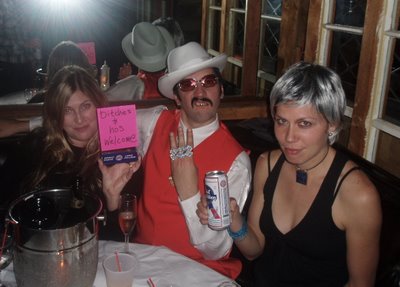 A week later I got a voice mail from Cathy wherein she asked me, "Why aren't you calling me back, you dirty whore?" Only days before, I'd called someone a cheap whore just for finishing the last bottle of Riesling.

BECAUSE IT'S FUNNY TO CALL SOMEONE A WHORE WHEN YOU KNOW THEY'RE NOT A WHORE. 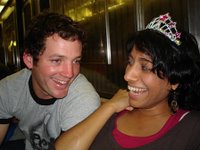 I met Cathy, Jane, Seema, and Chris in New York and the first thing they did was put a tiara on my head. "You get to wear the pretty princess tiara," Jane told me. "until you call someone a dirty whore and then you have to relinquish it to someone else."

Well, that tiara stayed firmly on my head all night, not because I didn't call anyone a dirty whore but because none of our arms had the inhuman strength to pass it around as often as the rule necessitated. In the next three days, we called each other dirty whores no less than, I don't know, SEVERAL THOUSAND times.

They developed a ranking system and told me that I was dirty whore #5 and here I actually did take offense.

"Number FIVE? Out of five?" I protested with indignation. "Hey, I get action!"

I remembered how Jocardo and I used to casually refer to people as crackwhores until we realized a few people we knew actually were into crack and/or whoring and the term suddenly sounded less funny and more sad.

Sorry about yer ranking. I still believe in ya.... Look at the good work you can do just sitting outside the airport! Go get em you dürty thang....

okay which one of you has a swedish keyboard?