May I Kiss Your Boots?

I flew from New York to Minneapolis/St. Paul and immediately after deplaning got a call from Gail. "I'll be there in about ten minutes. I'll pick you up outside baggage claim."

"And what is your car's name?"

Gail told me, "Diana. Because she's a hunter. She's killed a couple of deer."

I sat on a bench outside baggage claim and got another call from Gail.

"Jess, I'm sorry, I'm stuck in traffic on 694 and going three miles an hour. I don't know how long this is going to take."

I sat and stared into space until a man walked up and wordlessly held up a index card that said:

MAY I KISS YOUR BOOTS?

Instinctively, I shook my head no and he turned to walk away.

Hang on, I'm curious, what the hell. I called out to his retreating back, "Wait, why are you carrying that around?" 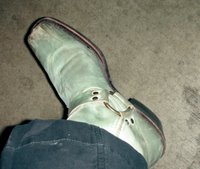 He turned around and said, "BECAUSE I'M A SLAVE and this is how I meet mistresses and those are nice boots."

He sat on the bench next to me and I asked, "Does it work?"

I hesitated. "Do we have to exchange money?"

"Oh, no!" said the slave and managed to appear shocked by ME.

I noticed that he had a handful of index cards and I asked him what they said. "Nothing," he told me and shuffled through them to show that they were blank.

I wonder if he makes cards particular to each potential mistress or if he happened to carry a May I Kiss Your Boots? card on a day when I happened to be wearing F'IN SWEET BOOTS.

Slave handed me a piece of paper and politely said goodbye while lightly touching my shoulder.

I skimmed the letter he gave me and caught the opening -

Superior Mistress, Thank You very much for allowing me to kiss Your boots. i consider it an honor. Certainly, my rightful place is at Your feet. i adore Dominant Females. If this is how i behave in public, imagine what i would do behind closed doors!

- and put it away, laughing about how my visit to Minnesota was more about seeing the leaves change and meeting my friend's 3-month-old daughter than urinating on a stranger in some basement.

The next day, while Gail made soup, I handed the letter to her husband, Dave, to read aloud to us (exerpted here):

i have years of experience serving Dominant Women, and i am thankful for the Mistresses who have trained and abused me. Contact me if You are ANY of the following:

The middle part of the letter outlined how the slave seeks messy, show-off, sadistic, and broke women so that he can clean their houses, work in their yards, give them money, and suffer for them. Once or twice he might have mentioned being tied up or having weights attached to his balls.

And I can't tell you how much I got a kick out of hearing earnest, upstanding, outdoorsy Dave say, "ESPECIALLY WITH SORE BALLS."

"Why would I make that up?" Dave asked.

The slave feels that he is following his destiny:

i have accepted my fate. i am entitled to NO gratification, either sexual or financial. i am serious about the concept of Female Supremacy, and Mistresses are fun to serve and be around. my best friends are Women that i have served. Have fun! Take pictures! Even if you have no experience as a Mistress, i am a good slave to start with. You will find me generous and kind. References available. Submissively, shorty. (Followed by phone and email) 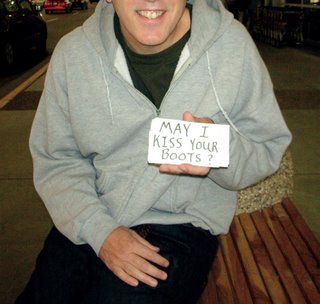 I am not publishing shorty's digits out of respect for the fact that I appreciate his POLITE and THOUGHTFUL approach to slavery: e.g. leaving immediately when I shook my head no, returning only when I spoke to him, NOT ACTUALLY SAYING anything from the letter, and not coming back.

Any of those things would have been creepy but in light of their absence, I deem his style of sadism honest, if not downright mature.
Posted by ronckytonk at 12:41 PM

I enjoyed reading your blog very much. Thanks for taking the time to keep it going.
Shane
World Fitness

In the interest of accuracy,at least 7 of Shorty's digits are visible!

his "style" is masochism not sadism.

I love stories like this. Keep up the good work! ^__^b