On a journey with a siamese cat and a regular cat

The night before I was to leave Chicago, Shane told me we were going to have a celebration. I didn't know if he meant to celebrate the magical world of High School Musical I was about to enter or the fact that I wouldn't be around for a while to cast him dark looks and make fun of the way he shovels, but I was in.

I was starting to feel bittersweet and conflicted about my sudden departure and it wasn't just the fact that I was uprooting myself almost immediately after I'd told myself to lay down some f'in roots and stay put.

It wasn't just the disruption of the local work I'd found and really like doing. It wasn't just the fact that I wouldn't be able to wear the heavy wool-lined winter boots I'd bought, those which look EXCESSIVELY prepared to stomp down icy sidewalks. 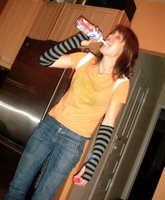 It was the little stuff around the house, the funny stuff mixed in with the everyday moods and schedules and frustrations, that makes living with friends different, and in many ways better, than visiting for a weekend.

For eight weeks, I don't get to see Sunny defile the Reddi-Whip and then try to tell me that it's organic, except for maybe the ingredient "propellant".

I'm not going to hear Shane singing "Po-rk Shoul-der" in honor of the pork shoulder given to him in Memphis, checked in his baggage, flown home, carved up, and sung about in tune to the 1984 hit "Sex Shooter" by the Prince-created 80s trio, Apollonia 6. 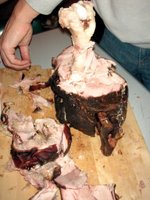 Pork Shoulder
Shootin love in your direction.
I'm a pork shoulder
Come on play with my affection.
Come on kiss the gun.

The night before we thought I was leaving, before we knew for sure that a blizzard would cancel flights out of O'Hare, Sunny went to bed early since she's a responsible teacher who knows something about waking up at 6am to face a roomful of 15-year-olds. Shane and I stayed up and made drinks. I got on and off the phone with American Airlines and we talked and made more drinks and put on a movie.

Sunny came out for water at one point - not be confused with the point when she stuck her head out from the bedroom door and asked us to keep our voices down - and asked what we were watching.

"Thank You for Not Smoking," I said.

"We're not really paying attention, but we think it is," I said.

A little later Shane said, "This movie is making me feel like I didn't study."

"Filmmakers are the worst," He added.

"Who's the second worse?" I asked.

"Writers," He said. "Well, writers are the best of the worst."

"Who's the most terrible of everyone?" I wanted to know.

"I think they belong on a different list," I said.

So we began making lists and I transcribed. The next day when Sunny came home from school, I read aloud from my notebook what Shane and I talked about the night before. What we found at the top of the page, free of any explanation and with no context whatsoever, and nowhere near any list was ON A JOURNEY WITH A SIAMESE CAT AND A REGULAR CAT.

And neither of us have any idea what THAT'S all about. I'll miss this place.
Posted by ronckytonk at 11:43 PM

I think we should fight about who gets to be siamese