Shane suspects I sit around all day and blog around him. He thinks that if he hasn't read it, it's because I've written about him secretly on my OTHER blog, the top secret blog I keep from him.

When P-nut comes over to the house and doesn't see me right away, he asks, "Where's Jessica? Blogging?" And if we go out to dinner, Q begs me to tell him what I've said about Shane. WHEN I HAVEN'T SAID SHIT ABOUT SHANE. Except that he hates roommates.

I'm going to end that right now. The saying, not the hating.

When Sunny and Shane asked me in August to move in with them, we struck a few deals. One deal was that we'd start by living together for six months. After six months, we'd decide if I should stay or go because either a) I'd need my own space for temperamental reasons and/or b) they'd realize there's a reason married people don't always let the best friend of one of them move in.

The second deal was that I'd pay rent on October 1 for the little room in the front of the house, off the living room.

The third deal was that Shane would put up doors on the room.

It would be untrue to say that we agreed the doors HAD to be up by when I moved in, but that was maybe implied. Sunny and I cracked prescient jokes about how Shane and I were going to have funny fights about the doors. Or lack thereof.

I got to Chicago on October 9 and knew that Shane had to special order the doors since the space wasn't a standard size. I'm not going to speculate about when Shane actually talked to the door people and told them to start cutting because that doesn't matter. What mattered is I knew doors were on their way. 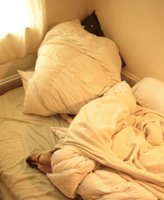 In the meantime I thought it was cute that Hugo, the brown dog, stuck his head around the curtain every night to check and make sure I was there before he went to bed in the other room.

And I was cool with Lulu, the pit bull, bossing me around and growling menacingly in the middle of the night when I tried to wedge my body out from the space between the mattress and the wall that she had squeezed me into. 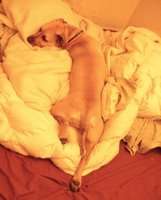 A part of me has come to accept that it is, if not Lulu's world, Lulu's bed, and she's just letting me in it. 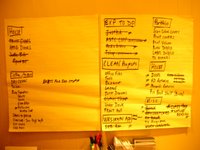 Eventually the doors arrived but stayed in the garage while Sunny painted them silver and let them dry. I covertly took photos of Shane's to-do lists, written on the biggest post-it notes ever. You can see here the giant post-it notes and lists, posted over his desk, carefully categorized and crossed off. 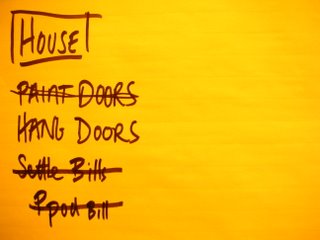 The contractor was supposed to hang the doors on Friday, THE DAY I WAS TO LEAVE CHICAGO for two months. We all thought that was pretty funny. The contractor's truck couldn't drive through the blizzard, however, the same blizzard my plane couldn't fly through, so I was still home on Saturday and getting ready to go to the airport when the contractor said, "Yeah, I'll do it, but I can't do it right now, I don't have time."

And Sunny and Shane and Lulu and I were all like TELL ME ABOUT IT. 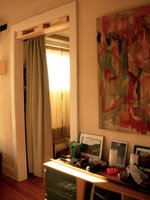 Posted by ronckytonk at 7:18 PM

sometimes we just go in there wonder, where big bunny at?