I'm not afraid to talk about your cervix 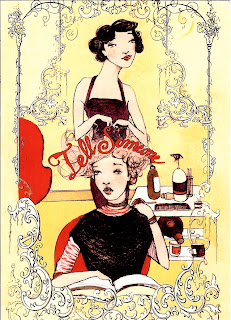 I'm not a person to run from a conversation about cervixes, although I used to be better about it. Or worse.

Ten years ago, at Evergreen, I stood in front of fifty classmates and lectured them on the glory and the power of menstruation. I was studying women's health and public health and while I never went so far as to wear purple and call myself a goddess, I might have participated in a girls-only drum circle or two. Afterwards I probably back to my dorm room to weave some macrame jewelry and patch my overalls; I don't really remember.

Once Jocardo asked me what a cervix looked like and I held up my worn-down-to-the-nub tube of Chapstick and flashed him the waxy donut end.

Now I'm not as impassioned about enjoying PMS and the messages from the universe that it delivers and I honestly don't care if tampons are patriarchal because pads are a pain in the motherf'ing ass but I AM diligent about going to Planned Parenthood every year to check out my business.

Recently one of my friends had her own yearly pap smear and was told that she had pre-cancerous cells on her cervix. This freaked us out because the c word is inherently scary but she also found out that calling a cell pre-c doesn't necessarily mean anything.

Turned out, however, that her cervix had some severe cell growth, so a few days ago they knocked her out to scrape the cells and cut away a little part of her waxy donut.

I can barely sit still when writing the words "scrape" and "cut" in this context and when I spoke to her on the phone about it, I was walking down the street, shaking the words off with my wrists and legs between steps like they were body tics.

I also learned that all this scraping and cutting is due to a STD called Human Papillomavirus which makes the cells grow in the first place. And that HPV is FAR more common - 20 million people have it right now - than we realize. There are 100 types of HPV and most types are low-risk and without symptoms, so unless we get a genital wart or an abnormal pap, our body fights the infection off and we stay happily ignorant that we are one of half of all people having sex who get HPV at some point. The high-risk strains of HPV can lead to cancer.

After I got off the phone with my friend and shook off the last few tics, I pulled this Tell Someone postcard out of the folder where I'd kept it for a few months. I'd kept it because I like the drawing but never really looked at the back. Now I looked at it more closely and saw that, golly, it's about cervical cancer!

Thanks universe! Sorry I haven't paid as much attention to you since graduating from Evergreen. 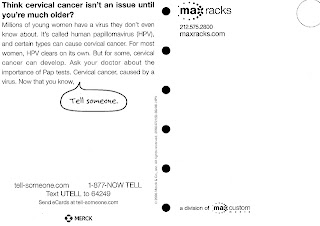 At least 30 million Americans are already infected with HPV and approximately 5.5 million new cases of sexually transmitted HPV infections are reported each year, according to the American Social Health Association. At least 50 percent of sexually active men and women acquire genital HPV at some point in their lives. By age 50, at least 80 percent of women will have acquired genital HPV. An estimated 9.2 million sexually active teens and young adults have genital HPV.