Are you f'in kidding me?

The latest batch of DJ Empirical photos from local events just went online and Matthew pointed out that I consistently look like, "Are you fucking kidding me?" in pictures.

I wanted to protest, "What are you talking about?! I smile all over the place!" But it's true; I can't seem get that smirk off my face. 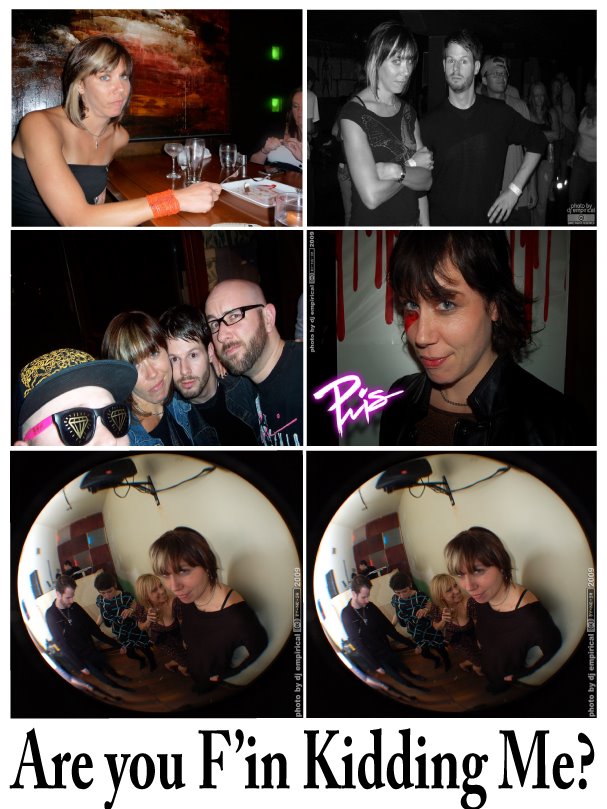 You know those people who've shown abundant joy in every single photo taken since the beginning of time and have a signature flashy HIIIII grin? Not here.

I look so different from one photo to another that I'm not always recognizable. I'm also not super comfortable having my photo taken, something that I may have inherited from my mother, who, I'm sorry I hope this isn't going too far, looks constipated in a lot of photos. Beautiful! Just kind of squinty and worried.

I actually had a conversation about this with a member of the Spice Girls back up band and he said that I should practice smiling in the mirror to find what works for me. I considered this for 1.5 seconds before deciding that while I am vain, I'd still find that way too embarrassing and resigned myself to my nervous tics and smirks.

On that tour I ushered people in and out of rooms where they had their photos taken with the Girls and I observed the Girls turning their smiles on and off hundreds of times. One of the Girls had a cute way of turning her cheek and uplifting her chin.

Which I began to imitate. I'm doing it here in such a way as to invade Dave's personal space. And here as if I'm close personal friends with a helium balloon.

Sometimes I still get stupid and pull shit like this but every now and then someone catches a real, full-on laugh. Like, whoa. Whatever went down in that last one is ejecting me from my seat and forcing an internal exam of Merrick's esophagus on the audience. I want whoever is saying something that funny to come over to my house and say it again right now.
Posted by ronckytonk at 11:37 AM

Labels: are you f'in serious?, for yer consideration, photo