For a tour manager I stink at planning personal vacations, particularly the recent one to Utah. Thanks to said vacation, though, I'm taking back all the shit I've talked about Utah in the past. Because I have a new respect.

Matthew and I wanted to go east after Christmas to snowboard and then head to New York City when I found out I was working a concert in Las Vegas on New Year's Eve. We changed direction and found the closest snowy town to Vegas - Brian Head, Utah - and booked tickets there instead.

That's where things started getting complicated, NOT that I knew it at the time. Thanks, however, to some of the nicest people and by that I mean the Utahns I met between December 27 - 30, it ended well.

Bob Whitelaw, please stand up. Actually, grab your brother Bret and take a bow together.

It began with Bret. Bret works at the Cedar City airport, where we flew to on a propeller plane from Salt Lake City. We were supposed to land at 5:30 pm but our first plane was halfway there, above the snowy mountains, when the pilot told us that we had a "small but significant" equipment failure and had to turn around.

I looked at the mountain range below and felt doom. To me small means a PIN, and significant means the pin is holding together the entire right side of the aircraft or at least a significant part, like the wing, and I can kiss my sweet future goodbye.

This same news made Matthew pep right up. Like, sweet, our plane is screwed, let's DANCE. Anyone know any old cheers from seventh grade? Bring it! Seriously.

Back in Salt Lake City, the pilot left the cockpit, went outside and inspected the wing with his flashlight, a gesture that I did not appreciate. It seems to me that if a problem is serious enough to cancel a flight, it probably requires more than a flashlight to remedy. But that's just me and I don't know how to a) fly or b) fix airplanes.

We sat there a while and caught a few of the corny we're-all-in-this-together jokes that people crack when they have a captive audience. We talked smack about the stewardess who didn't give us any water and then the pilot told us, basically, we'd get going as soon as they rebooted the plane's computer. Awesome. I was dispirited at the thought of missing a night of the bearskin rug, raging hearth, and steaming cup of cocoa I was sure awaited me in Utah so this was good news. I can deal with software malfunctions as long as no pins are falling out of the wing.

Cedar City Airport, 8 pm. Here's the thing about assumptions: they're often wrong. I assumed that since the Cedar City airport is the closest airport to Brian Head, it would fully service the ski town - shuttles, taxis etc. We were renting a condo so we didn't have a hotel to call for a ride but I didn't see that as a problem; We'd just hop on whatever was driving the 30 miles to Brian Head. Ha!

The one cab that seemed to be running in town picked up four other people on our flight who needed a 2-mile ride into Cedar City. I asked the driver to come back to take us to Brian Head and he said they didn't go up the mountain at night. He gave me another number to call and I got a message that that shuttle service no longer worked in the winter. I called every transportation number in the yellow pages and was told that they either didn't go to Brian Head or there was no answer.

I walked back around the corner to find Matthew camped out by the front door.

"They're closing up here," he said. The doors were locked and most of the lights were off, solid signs indeed. A guy who worked there wandered our way and we told him we seemed to be stranded. He let me go behind the check-in desk to use their phone to make one last round of calls and then said he'd call his brother.

"I mean," he said, "He's kind of busy since his wife had a baby four days ago but he might drive you up there."

"Are you serious?" I asked.

Friendly airport guy, who we eventually learned was named Bret, said it takes an hour to get to Brian Head, another surprise to me. "How much could you pay him?" he asked me.

I threw the amount $75 out there and Bret called his brother. After a lot of explaining on Bret's part, I caught that his brother was having family time and maybe not thrilled to drive two hours up and down a mountain at a moment's notice. So I scribbled this note and held it up for Bret to see: 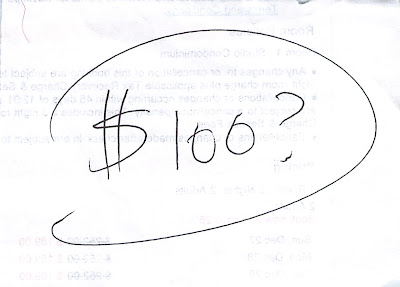 Money talks, people. We were in business. And I want to emphasize that this was a hundred dollars very well spent. A pickup arrived shortly and two men got out with hands extended.

Bob brought along his brother-in-law who was visiting from San Diego, a nice young man named either LaGrange, LaGrand, something along those lines. LG and Bob asked us if we were hungry, if we had food with us, and if we wanted to stop at a grocery store. Apparently there wouldn't be much open near us at night in Brian Head. At first we were all no no, we're fine, it's okay and then reconsidered when Bob emphasized there would be NOTHING TO EAT IN BRIAN HEAD.

"Maybe we'll stop at a gas station," we said.

At the gas station we loaded up on yogurt, fruit, popcorn and Folger's crystals. We piled back into the truck and headed north on I-15, through a small town or two and then hit the road going up the mountain. Bob and LG were charming. Bob told us Utah history and all about Brian Head. He owns cabins and condos that he rents out and his relatives own Georg's Ski Shop. LG told us about his day on the slopes. They asked us about us, we chatted it up and it was totally fun.

Bob knew the condo where we were booked but he didn't just drop us off in front of a snowdrift and go buy a hundred dollars worth of baby diapers for his 4-day-old. He drove us around town and pointed out the main places to know before he and LG parked and came in with us. They made sure our reservation was good, pulled the truck into the garage and helped us get our bags to the elevator.

Side story: One might think I'd know how to pack lightly considering the amount of traveling that I do. One would be wrong.

Then, THEN, two days later, when the talk of the snowstorm about to hit threatened to strand us on the mountain overnight and I'd really be effed if I didn't make it to Vegas the next day, I asked Bob if he could drive us back down to Cedar City early. It was out of his way but he said he would if we were stuck.

He knew my cell phone had no service so he left a note for me behind the desk. I ended up reaching Iron City Shuttle who sent a car up the hill so Bob was off the hook but MAN, that guy was pretty great. And the next time I go to Brian Head I'm staying at his cabins. I recommend that anyone who goes to Brian Head stay at his cabins. And maybe rent a car with four-wheel drive.

Also, have Verizon or Sprint because AT&T doesn't work up there. I bought a calling card and spent a ton of time on landlines being told that all circuits were busy so a special thanks goes out to the lady at the ski lodge who handed me her cell phone when I asked if there were pay phones. "I'll be back there when you're done," she said, pointing to an office around the corner before disappearing.

Even our cab driver on the way back down was so gosh darn friendly, I almost got his digits so we could send him a thank you note or a Target gift card or something. I don't know if it is the small town factor, the tourist industry standard or just UTAH but goddamn, I approve.
Posted by ronckytonk at 8:38 AM