Utah scares me but it sure is pretty


I've been to Utah half a dozen times but each visit was short and less than 24 hours long. Recently I was in Salt Lake City for 11 hours, between Benise's Sacramento and Denver shows. 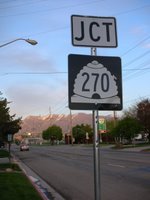 I was walking down a Salt Lake City street feeling unnerved by the cleanliness that I find somewhat unnatural and creepy, when I saw this sign and started thinking more about the Beehive State.

I know that Utahns got this moniker because their settlers, the Mormons, fled the Midwest, followed Brigham Young into the desert in 1847, and worked like busy little bees, displaying all of the industry and cooperation and toil typical of pioneers.

I know that Joseph Smith (1805-1844) founded The Church of Jesus Christ of Latter-day Saints - AKA Mormons - in 1830 and that he's considered a major prophet by Mormons, right up there with Abraham and Moses.

Joseph's family back in Palmyra, NY were Christians who respected all denominations. In his teens, however, many of them converted to Presbytarianism, and for whatever reason this troubled Joseph to find one true Christian religion.

Instead of rebelling like most teens by withdrawing, smoking, and getting into moonshine, Joseph had VISIONS: From God, Jesus Christ, and the formerly unknown Angel Moroni. Revealed to Joseph was the location of golden tablets which told new histories of early American tribes and the Bible.

Well, it caused a stir.

Joseph's followers eventually moved from New York to Ohio, Missouri, and Illinois. And everywhere they went they pissed people off because they said their brand-new faith was the only valid religion and that the Book of Mormon was THE work of God, right up there with the Testaments.

Community relations were not helped when Joseph introduced the concept of polygamy and encouraged Mormon men to take more than one wife. In fact, it led to his being killed at the hands of an angry mob.

My childhood intro to the religion were the Mormon girls who lived on my street. They weren't allowed to drink soda, which didn't faze me since my mom didn't buy soda either, though for reasons related more to my sugar intake than salvation.

What did make an impression, however, was the Mormon girl telling the Catholic girl who trotted up the street everyday to St. Mary's in her plaid skirt that she wasn't going to heaven. Tears were shed, parental reassurances were given, and I thought the whole thing could have been avoided if we all went to Montessori school and learned from the lesbian ex-nuns to think for ourselves.

I actually own a Book of Mormon.

In an unlikely but true scenario, I once pounced happily on a group of Mormon missionaries when I was 18. I didn't care that they wanted to convert me, I didn't care that we didn't agree on anything except that soda isn't good for you. I was in Chile, I didn't speak Spanish, and I hadn't expressed a complete thought in way too long. So when Elder-This and Elder-That knocked on the door, I was uniquely amenable to shooting the theological shit and I talked and talked and talked to show my Chilean hosts and remind myself that I could do more than smile, nod, and say thank you.

I didn't give Mormons or Utah another thought until a friend, Anonymous, took a cross-country road trip and stopped in Salt Lake to buy drugs.

Anonymous told me that the crackhouse he went to was lovely and immaculate. Anonymous said he would have joyfully eaten off the floor of the spotless crackhouse. I imagine it as the IKEA model of crackhouses.

Having been to Salt Lake since, I'm not a bit surprised by Anonymous's well-lit and sparkling drug experience. I have watched what I assume were city employees spot-clean the rims of garbage cans on downtown streets with spray bottles of disinfectant.

The city gives off a STRONG WHIFF of sanitary tidiness. But I think it smells funny. 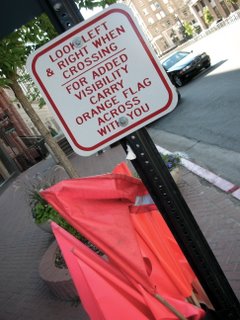 My favorite are the orange flags: LOOK LEFT AND RIGHT WHEN CROSSING. FOR ADDED VISIBILITY CARRY ORANGE FLAG ACROSS WITH YOU.

It's fun to take pictures of each other tromping across the street, waving orange flags at cars. It's a good joke. Especially when you're half drunk on sake.

It reminds me of Seattle, where jaywalking is a big no-no. I was once followed into a coffeeshop by two cops who informed me that they saw me crossing the street without using the crosswalk. They didn't give me a ticket, just a warning, and a friendly reminder that what I'd done was illegal and dangerous.

I found this reprimand by the Seattle police just as I found Salt Lake City's orange flags: hilarious. And irritating.

I think orange flags and friendly reminders are patronizing. They offend my sense of personal responsibility. I think the penalty for being dumb when crossing a street should be getting hit.

Is it THAT different to say, "It's not my fault I got run over by a car! No one gave me an orange flag to wave around!" than "It's not my fault I'm raping a fifteen year old who didn't want to marry me! I need at least three wives to gain entry to the kingdom of heaven and I'm just obeying the will of the Lord!"

I know that plural marriages were outlawed by the church in 1890 and that the so-called fundamentalists of the Church of Jesus Christ of Latter Day Saints are not even considered true followers by more mainstream Mormons. The fact remains, however, that the fundamentalists are numerous - there's an estimated 6,000 to 11,000 thousand members in the U.S., and powerful - they rule the border cities of Colorado City, AZ and Hildale, UT.

This is nothing compared to the populace of the regular old LDS church which exceeded 12 million in early 2004. But in terms of how many women they have BRUTALIZED, it is significant. Because plural marriage is no free-wheeling hippie lovefest. PLURAL MARRIAGE IS NO RAINBOW GATHERING.

A lot of boys in Colorado City/Hildale aren't psyched about it, either. The creaky, old, rheumy-eyed men tend to kick them out of the community, especially if they're hanging out with a teenage girl THEY want to fuck.

I mean, the old man has had his eye on his friend's daughter since she was like TEN, and she's finally getting tits and getting old enough to start having ten or fifteen kids, and some young punk thinks he can GIVE HER A RIDE HOME FROM SCHOOL?

If I were that boy and tossed out into a world I knew nothing about and cut off from everything and everyone I'd ever know, I'd probably do meth, too.

Men who do stay and enter the upper echelon of the community are still afraid. If they lose favor with the leader, they'll lose their homes and their wives and children will be reassigned to other men. Women are afraid for the same reason. And they're all quaking in their boots over disobeying the leader for fear that they'll lose salvation.

I know I'm a public school heathen who no amount of baptism, confirmation, and weekly CCD classes can save, but seriously: CAN SALVATION BE THAT GOOD?

It looks like the government is finally getting on the case. I hear that the current FLDS leader, Warren Jeffs, is being indicted on two felony charges related to underage marriages and that on May 6, the FBI announced that it had placed Jeffs on its Ten Most Wanted Fugitives list.

It is also alleged that Jeffs had warned members that LAUGHTER CAUSES THE SPIRIT OF GOD TO LEAK FROM THEIR BODIES.

Now that pisses me off.
Posted by ronckytonk at 1:19 PM