The face of a ho? 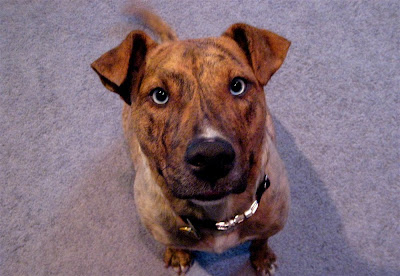 I was at the dog park with Patsy. There was only one other dog there - Rufus - and the two of them played hard, roughhousing, chasing, and rolling around in the dirt. Right at the end, just before we left, Rufus jumped on her back end and tried to hump her for all he was worth.

Patsy didn't go for it and snapped him off. She isn't into ass play unless it's herself licking herself for A REALLY LONG TIME, JESUS. No one else is allowed to go there, not the veterinary assistant with a thermometer, not Rufus, no one. But when Rufus chased our car and barked at Patsy through the window, she whined and barked for him inside and I commented that they seemed into each other. Does one attempted hump in dog language equal love?

Two days later Patsy's eye was pink on the inner rim and goop was seeping out. We took her to the vet and she was diagnosed with pink eye.

"That slut Rufus!" I said. "He totally gave her pink eye!"

I took her back to the vet a few days ago because we were out of antibiotics and while the eye is no longer gooey, it still seemed too pink on that one edge. Dr. Baker checked it out and told me that she didn't think it had been contagious in the first place, just an irritation, that pink eye is rare for dogs and that it would have spread to her other eye.

Apparently Patsy's third eyelid - Dogs have three, I did not know that - is just plain pinker than the other one. Fine. The other vet must have called it pink eye so we'd wash our hands 3,000 times more daily than usual, it's cool. Perhaps we inadvertently escaped succumbing to H1N1, I don't know.

ANYWAY, with the new non-contagious bill of health we were finally allowed to go to the dog park again and the last two days were sunny and warmer so all humans and dogs were happy. I was standing in the grass yesterday watching the dogs when I recognized Rufus' pizza delivery guy owner on the other side.

"Rufus has arrived," I texted Matthew.

And 30 seconds later, "And he's eating Patsy out."

She didn't put up a fight.
Posted by ronckytonk at 8:28 PM

Hands down...one of my favorite posts! Go Pats. You caint fake the fake and you caint knock the hustle. Hate the playa, not the Puswa licker!