Moments before I learned something huge on Facebook, I read an inconsequential status update from someone. It was a throwaway comment along the lines of CAN'T DECIDE WHAT TO EAT FOR LUNCH!!! The kind of thing that makes me think we are all just wasting our time. I was toying with the idea of quitting Facebook and everything else in my life that might be a waste of time when I clicked on Joey's page.

I started reading his wall and couldn't believe - literally couldn't - what I was reading.

I called Kevin, my assistant tour manager, and asked him to look at Joey's page.

"I don't know if this is a cruel joke," I said, "But I think something's happened to Joey. Something bad."

I've worked with Joey for the last four years. Every time I'm in LA before a tour, Joey works as our rehearsal runner and I've spent between 3-6 weeks every year in an room with him working, laughing my ass off, talking, and appreciating how well he takes care of us.

I called him before I got to LA last week to reconfirm his start date. I didn't hear back so I emailed him. Last Friday I spoke with Kevin on the phone and told him how weird it was that Joey wasn't getting back to me because he's always the first one to call and check in. Maybe he's tired of us, we said, maybe he's peaced out. It doesn't seem like him but you never know, we agreed. I decided the next day to go to Facebook again and try to find him there one more time.

Kevin took one look at Joey's Facebook page after I asked him to, called me back, and confirmed what I didn't want to know: that Joey had passed away and was gone. He died the day before.

What I've learned is that he was having trouble sleeping and was having some problem with his hands going numb. He was going to have a surgery and was given painkillers so that he could sleep beforehand. He took too many. He turned blue in his sleep and was rushed to the hospital. He went into a coma and never woke up. Sometime later that week, the doctors told his dad that his brain had swelled and that if he came out of the coma, he would be brain dead. So his father gathered all of his friends around and they said goodbye and let him go.

Kevin and I tried to understand that Joey was gone. "You know what's crazy?" I said, "I was just thinking that Facebook is so useless, just a huge useless drain of energy, and I go to Joey's page and there all these people who love him are writing to him. Not about him, TO him. They're writing him letters like he's reading it."

In this instance Facebook wasn't a community of people broadcasting the fact that they'd brushed their teeth that morning, it was a central place for Joey's people to share with each other - and, oddly, with him - why he was special to them. I just never would have thought of that.

I did think about little things, about how last summer when I was still on my kick of wanting a pet pig partially out of seriousness and partially to antagonize Matthew, I told Joey and he got so excited for me. He told me about the pig named pumpkin that he'd adopted in Hawaii and told me how funny and smart and cuddly it was. 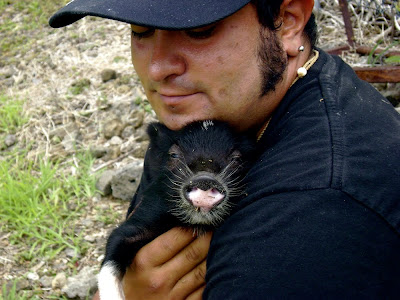 I thought about how he always seemed to be in the middle of or embarking on a creative project and I probably should have listened more closely. Unfairly I tend to turn off when people in LA talk about film and scripts because it's so pervasive. But Joey wasn't a stupid blockbuster type he was more about darkness and truth and I wish I'd asked more questions.

I thought about how our office sometimes resembled group therapy, all of us sharing what we were going through, the rest of us taking it in and offering our perspectives. Joey was thoughtful. I love it when the person who looks like the biggest hooligan ends up being the sweetest and the nicest. That was Joey. He would surprise you.

We'll miss you xx
Posted by ronckytonk at 12:20 AM

An absolutely incredible person. Joey, you will be missed.