Dance party 3000 AKA my wedding

I was blown away by my own wedding and it's ironic because I can be kind of a hard sell. When I got engaged, those who know me best said things like, "Ohmigod, I know you're not the type of girl to get all into this but I'M so excited!"

All of the messages we are force fed about weddings: The Best Day of Your Life, Your Perfect Day, all of that makes me see red. I told myself that I wouldn't be the girl who cared if things didn't go as exactly as planned, I would be the girl who laughed. What I didn't plan for, exactly, was how moved I would be. I was so used to rejecting the crushing wedding images that I underestimated my own ability to be happily stunned.

I THOUGHT I just wanted to throw a serious party. And I did, with the help of many, many people, a long list topped by my parents who were - and I need caps for this - UNBELIEVABLY COOL. ABOUT EVERYTHING. I'd put all the emphasis on the party because that was the point, or so I thought.

After Matthew and I were legally married in all of four minutes in Vegas, my mom told me that I didn't really need to do a ceremony in May, it could literally be just a party. Instinctively, immediately, I thought no, it's more than that. I realized I'd been calling it a party to avoid all the connotations I despise about weddings. I craved, actually, ritual.

It came down to this. I believe in love. I believe in deep, searing, beautiful, painful, truthful love. It's the trappings I take issue with, the boring old shoulds and thoughtless expectations. That's what I run from. In a wedding of my own, could I focus on what I think is important and lose the stuff that pisses me off? Could we create a ceremony that reflects who we truly are?

At the Graceland Chapel we'd had a fifteen minute time slot, a fraction of which it took to be legally bound. Elvis was awesome, Allison, Jacky, and their two cousins were great guests, showing up on short notice and jumping up and down clapping when we sealed the deal, but the words we said weren't ours. They belonged to the state of Nevada, Jon Bon Jovi and everyone else who was married there.

Our May wedding invitations sidestepped the matter by inviting everyone to "celebrate our marriage" without saying what form that celebration would take. All I thought of initially was food, booze and music. Then, after my mom gave me the out to ditch the wedding part, I started thinking:

What did I want to say to Matthew and about Matthew? What did I want to say about how we view marriage? How would we articulate our approach? And if it differs at all from the norm, could we explain how? Our minister was to be Sara, my friend of 13 years and a new friend to Matthew. Sara and I have seen each other through much and I wed her to Michael seven years ago. What would Sara say to me, to us? This was a fantastic opportunity! To show off for 250 people!

Oh, that. Apparently I have some social anxiety. Because the thought of 250 people all looking at me, all at once, freaked me OUT. "That's 500 eyeballs," I thought. All watching me walk down the aisle with my mom and dad and watching me talk, assuming I'd be able to.

When I was going over the ceremony in the month before with Sara, I wrote hints to her in the script: Here you speak quietly to us to help calm me down. Here is where I'll be shaking. Here you hold our hands. Sara vetoed the hand holding, knowing we'd probably make a mess of that but she was ready to help me relax.

It didn't matter that I would be with people who love us, as everyone reminded me when I confessed that I was practically wetting the bed thinking about it. I was scared. But the weirdest thing happened. I have never felt so calm and centered and focused as I did during that ceremony. I was high, in a good way. And I don't think it was just the beta blockers I took.

When I stood there, in my blue dress and matching boots - a big honking coincidence, by the way - with my aluminum bouquet, in front of turntables and a sound system powerful enough to throw an actual concert, I looked at Matthew and Sara. I knew I was surrounded by many of the best people in my life. That thing I believe in? Love? It was palpable.

To think that at one point I had even worried that bringing together so many different friends from different times and places might clash. Oh ho, quite the opposite. They got along very well, some TOO well. As Bova stated afterward on Facebook, he attended a very sexy wedding. He may have even mentioned sporadic nudity.

All of the planning around the obscure location we chose with mostly do-it-yourself details had taken on a fevered state in the two days before the event. I was trying to be attentive to my job with American Idol while executing and dispatching rounds of airport pick ups and hotel drop offs and sleepovers at my house. The food for the sleepover house at the wedding, how much liquor to buy for the open bar, the directions for Gail's family who was driving from Minnesota to stay at our apartment and watch the dog.

It was all good stuff but it was compounding all at once. Various people told me that I seemed really chill which shows only that I hide mania well. I had a pit in my stomach the size of the Grand Canyon.

I will tell you the exact moment that the pit disappeared. I watched Neil, my dear friend and ringbearer, dance down the last few feet of the aisle with the ring box in his hand and I started forward with my mom and dad. After agonizing over the procession song, I had finally chosen Auto Rock by Mogwai, a song that grows and builds and gets BIG. Auto Rock also means much to me as the first song on a mix I made in Berlin right after I met Matthew. I had listened to this song for hours and hours while walking around Berlin. It was a powerful, important time in my life and it's where I first got to know Matthew - corresponding from that city - to that song.

So I walked forward with my parents and and felt my face start to freeze and tic the way it does when I'm super duper nervous. But when we got closer, people stood up and started cheering. It was like a damn sporting event. It was INCREDIBLE. I started laughing and that's when the pit went away, never to return.

I mean come on, there were camper vans, tents, kegstands and scandal. Two of my fine, upstanding, civic-minded friends were too drunk to put up a tent and slept in their car. My brother, between seizures, stayed glued to my side, saying over and over, "Sister! Sister!" The kids I babysat in Cincinnati danced hard with the girls I ran with through the Amazon. I had friends and family making programs, party favors, and food.

I said SPACE CAMP and UNICORNS in my vows.

I love a good, good man and, conveniently, he loves me back. I don't know when I've ever been so happy. 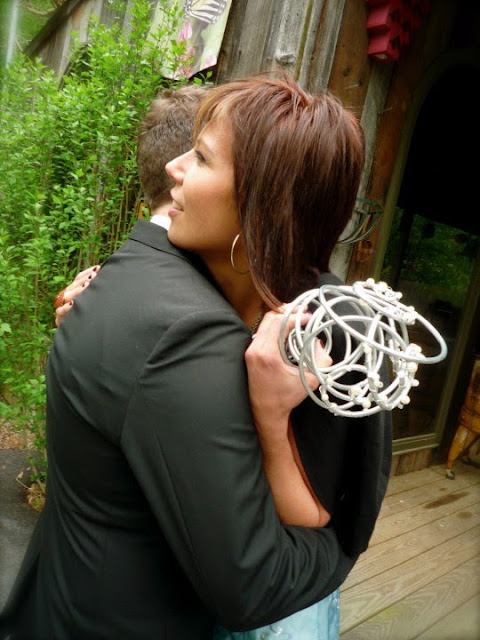 Jess, I thought your description of the wedding was beautiful. I cried. Dad

aw dad we all know you're just a big softie!

TeTa, I completely agree with you dad. Even about the crying. :)
-MB

and that was supposed to say your dad... but you probably figured that out. I just hate to misspell a word in a blog comment...