I went to Minnesota for work and stayed an extra day to play with Gail in St. Joseph. When I was in school at the University of Minnesota, Gail and I used to drive from Minneapolis to St. Joe, where she grew up, to visit her mom and eat grilled eggplant and salmon. Gail and her husband Dave and their daughters are now living in that same house on Kraemer Lake so we did the drive up I-94 this past weekend.

Gail is on "spring" break from the school where she teaches. Minnesota should just be honest and rename that break because there is nothing spring-like happening in March up there. 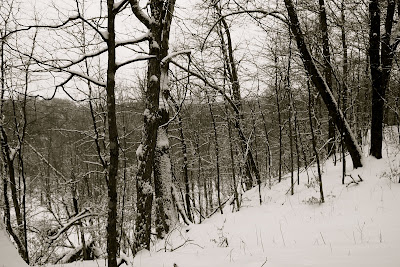 There was snow on the ground and more fell as we drove. We passed several cars that had spun off the highway and were sitting patiently in ditches, waiting to be rescued. In fact, all of the stranded drivers looked so, so calm that we had to laugh. I suspect they keep books in the glove compartment so they're not bored in the ditches that they casually spin into from time to time. Drivers from elsewhere who freak at weather (San Diego = rain and Seattle = snow) could take a lesson from Minnesotans who just carry on.

Gail took me cross-country skiing twice in the 24-hour period that I was with her. The first time we drove to the trail at 5 pm with flashlights in our pockets in case it was dark on our way back to the car. I had no idea what cross-country skiing is like but figured that since it doesn't involve mountains per se it wouldn't be hard. That assumption was incorrect but after awhile I started to get the hang of the rhythm and the glide of the skis and wasn't just clomping awkwardly along.

I stayed on my feet down the first slope but must have psyched myself out because after that I started falling regularly. When the trail split and Gail asked me which course I wanted to take, I thought I was being gutsy when I said, "I think I can hang with intermediate." I didn't know we were going on the black diamond route the next morning regardless.

What are the muscles that connect your armpits to your torso? And the one on the bottom outside of your forearm? Those are killing me right now. Something I didn't realize about cross-country skiing is that you don't stick to level terrain, you also go down AND UP hills.

"Okay, Jess! To go uphill, turn your skis out and try to run! If you lose momentum, it's really hard!"

We saw this bench and Gail suggested it as a photo opportunity. I agreed mainly because it would be a solid excuse to take a break. 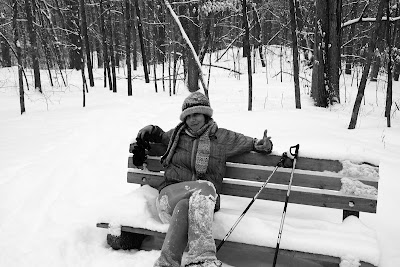 The next morning, we skied to the black diamond trail by cutting across Kraemer Lake with Gail and Dave's Alaskan Malamute, Iska, trotting alongside us. I was impressed that we were on frozen ice until later in the day when we were sitting at the table and I looked out of the window.

"You guys, is that a car driving across the lake?"

It was. Dave told me that it took him awhile after moving to Minnesota to be comfortable driving across the water. You have to be really, really sure that the ice isn't going to break, he told me. Um, Dave? Yeah! That occurred to me as well.

Earlier, when it was just us and Iska out there, our skis swishing tracks through the snow and our poles clicking against the ice, it felt so quintessentially northern and wintry that I half expected a National Geographic photographer to show up and document our efforts. Which just shows how grandiose one may get after exercising two days in a row if you are usually somewhat sedentary. 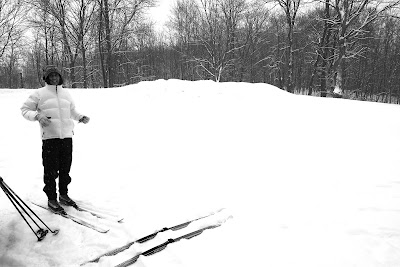 I have been wanting to go cross-country skiing for forever now. It looks so sensible and fun! Did you end up enjoying it?

Totally loved. I would go again right now but there's no snow in Texas.