I cut it and dye it and generally mess with it so much that I end up spending a lot of time in awkward stages of growing it out. If I could stick with a hairstyle, I would look more polished overall and less like George Washington or a medieval page. But I bore easily so, oh well.

My objective at the moment is to let my hair be itself...mostly. I'm done with the blow drying and flat ironing regularly; my hair curls and flips and acts out and I want to let it. But I'm not yet at peace with its natural color which is becoming, increasingly, gray.

I was born a humungous 10-pound slab of a baby with a little tuft of brown hair. I grew into a blonde kid and graduated to honey brown in junior high, aided in part by an affinity for buying Sun-in at Walgreens. Over winter, I was a darker brown. I spent a year of high school with long, fuchsia locks. I let a friend hack that off at some point and since then have experimented going shorter, darker, lighter, blonder, redder, whateverer.

In London in 2008, I let a hair stylist have his way and he, disdainful of blonde, dyed it a deep brunette with a heavy bang and a solid platinum streak. It was blunt and unapologetic and I thought it looked really good but it took WORK. I kept it up for awhile and flat ironed it to conform but the style slowly and eventually morphed into something else AND IT COSTS MONEY to have hair professionally maintained every few months. I'm also not willing to worry about my hair at the first sight of rain or humidity for the rest of my life; I'm not that fancy.

Since then I've gone jet black (not good with my skin tone) and several shades of brown with a few bleaching phases thrown in for good (bad) measure. I screwed with my hair so much that it was undeniably damaged last year: totally fried, limp, and stringy. I responded by cutting it all off.

Today I'm smack in the middle of another George Washington-ish grow out but I'm determined to keep it healthy this time. Once I realized I couldn't afford to dye it at the salon, I had three choices:

1. Be proud of my premature* gray and flaunt that shit
2. Buy cheap color from the drugstore
3. Find a third option

I initially chose 2 and went back to Walgreens, much as I did in junior high, but fuck, people, it hurt. The fumes from the dye stung my eyes and was obviously toxic.

Around this time I mentioned to Kevin, my assistant tour manager, that Matthew and I have a soap habit. We like soap and will throw down for a bar if it's handcrafted and smells delicious. Kevin responded by buying me a gift certificate to Lush as an end of tour gift, so nice! I did buy soap but I also read all about Lush Henna, a natural dye. No joke, I read nearly 400 reviews of Lush henna and by the time I got to #399 I was convinced.

Almost every person who wrote about Lush henna said their hair is softer, shinier, bouncier, and looks better than it did before. There are no chemicals leaching into your head and your brain when you use Lush henna. And it's relatively cheap. Why isn't everyone dumping this crap on their head? Probably because they either haven't heard how magical it is or they are scared by the fact that you can't put regular dye on top of henna so if you screw it up, you have to deal.

They may also be put off by the procedure: it sits for 4 - 8 hours before you rinse it out. It comes in blocks that look like baker's chocolate. You boil water, grate the blocks of color, mix up the four hues (Caca Rouge, Caca Marron, Caca Brun, Caca Noir) or use just one. Make a paste with the grated henna and slop/comb it into your hair. I rub vaseline around my ears and hairline, cover everything in sight with saran wrap including my head when I'm done, and then walk around with a shower cap on for the rest of the afternoon. 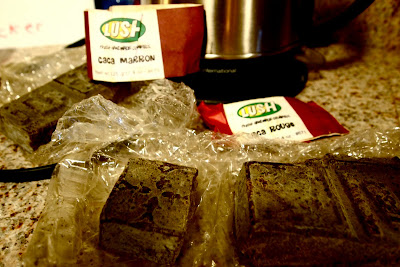 I know I'm not really addressing the fact that I could just HAVE GRAY HAIR. I'm not ready. I look at my mom who has the coolest most beautiful hair, who gets compliments on her naturally silver, naturally curly crazy hair all the time. She says that when she's in a room with women her age, she's often the only one who isn't dyed to kingdom come. She looks so, so good and I admire that she doesn't hide anything and isn't afraid of her age or her hair but I'm not there yet. Perhaps we shall delve into why in a later post? 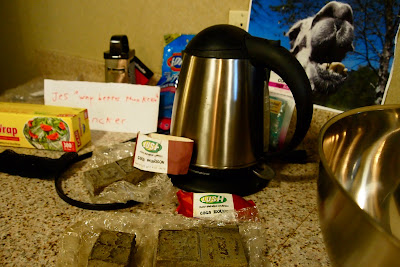 The last time I used Lush henna was on one of our recent days off. It was rainy and sucky out, the perfect time to hole up in a hotel room with a shower cap on my head, hoping no one pulled the fire alarm. 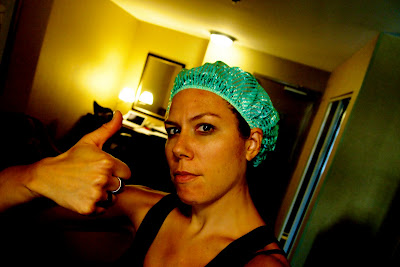 *I may be too old to call my gray "premature". Humor me.
Posted by ronckytonk at 7:36 PM

you should so rock out the grey !! i used to tone mine and dye it grey i wanted that colour so badly ! im sixteen so somepeople probably thought i had some kinda crazy benjamin button disease or crazy premature greys haha !

Hey Harry, I wish I wanted that gray right now but check back...I bet in a few years I'll be blogging about my gray buzzcut and how killer it makes me feel...

Oh I really hear you! I am in the process of growing out the crazy dark brown... only I always gravitate back to the home-dye section...

And all those chemicals down the drain...

Wish I could be cool with grey too!

BTW I did the henna thing for a while... just the buy it at the market in Africa stuff... much less instructions on the box... okay, not in a box at all...

I'm sorry if I'm a little slow with this, but the Lush Henna will color your hair . . . reddish? Can you post an after picture? I want to know, because now I'm the type of person who impulsively colors his hair WHITE one afternoon in September, and will never be able to afford to it again in his life.

Shmook, first of all, White? I want to see a photo, too. Second, in the photo of me a few posts above in Toronto, that was after I used henna so you can see that it's not red. I mixed the caca marron (dark brown) and caca rouge (red) but put more marron in so it was less red. It's all pretty experimental, though.

If you buy another brand of henna, I can't vouch for how it will work - I think there is a huge range of reliability and value. What I got from reading about it is that all henna is not equal.