To hellholes and back

I wanted to pull out my favorite parts of To Hellholes and Back: Bribes, Lies, and the Art of Extreme Tourism by Chuck Thompson to tell you why I liked this book so I sat down to flip through its pages again. Three hours later I was on page 77, devouring each chapter new. I should have underlined my favorite passages but instead was transcribing entire paragraphs and pages into my journal like homework, but happier. Chuck Thompson is FUN-NAY. 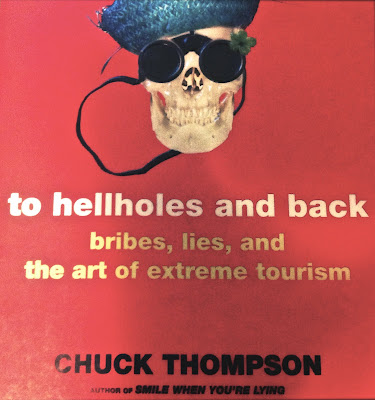 If you've ever, like me, done stupid crap while traveling - hopped in the pickup of strange men I met while they were machete-ing a snake to death on the side of the Mexican highway, or spent way more time with arms dealers and drug traffickers than my naive dumb ass ever should have let happen - then you will probably appreciate Chuck's approach to travel. Not that he was really out of line because STUFF JUST HAPPENS when you choose to go to places like the Democratic Republic of the Congo over, say, Club Med. The only exception possibly being when Chuck wrote of leaving his safari group and guides to wander through the plains alone. Whaaat? That chapter made my hair stand on end; I apparently fear lions more than I do Interpol.

The four locations he writes about are those he spent a year investigating solely because he was afraid of them. And, of course, maybe for reasons he wasn't fully aware of at first and needed a strong dose of travel-inspired reflection to tap into.

There were surprises, none more unexpected to me than his reaction to Disney World. If a man who says, "And no, it doesn't make me un-American to have assiduously avoided setting foot in a fabricated dream patch plopped in the middle of a morally rudderless state of bogus elections with a half-baked citizenry who think absolutely nothing of supporting an idiotic fifty-year embargo of Cuba or taking the Camaro with the slave-days flag decals to the corner market for a pack of smokes without bothering to put their shirts on. So, Disney," can end up liking Miley Cyrus then none of us should presume to take anything for granted.
Posted by ronckytonk at 10:41 PM

looking at your blog, it seems like you are someone that might be able to help me with mine..
if you have the time, take a peek and see what you think. i would love to hear from you!!
http://architectofdays.blogspot.com/

rriSo Jess, you won't hold it against Dad and me that we didn't take you to Disney World when we were in that town in 1981? Always felt a tiny bit of guilt about that! (Not really!)