Last week I met a photographer who told me about Barbie Live! in Fairytopia. A Barbie musical was opening in Columbus before New York and a New York Times reporter was flying in to cover it. He, the photographer, was taking photos for the Times. We laughed, imagining a campy Barbie revue that would highlight the roles Barbie has played since her debut in 1959. It would be full of adult jokes and irony. It would contain indulgent appreciation and/or gentle criticism of pop culture and the Barbie phenomenon.

I wondered what I should wear to a Barbie musical and decided my polka dot overcoat was perfect. I usually feel like an asshole when I wear my polka dot overcoat because it's extremely perky and doesn't match my personality in the least, but what is Barbie if not perky? On the day of the show, I drove downtown, headed for the Palace Theater, and was met with thousands of runners and blocked streets indicating that the Columbus marathon's route included a giant circle around my destination.

I sat in traffic and glowered at the runners, conveniently ignoring the fact that I usually advocate walking, cycling, public transit, and even running over driving. I thought uncharitable thoughts about each and every runner who ran past, including the ones in Team in Training shirts which I knew meant they were running to raise money for kids with leukemia and which I suspected made me a bad person.

Eventually I found a side street and a parking spot and I, too, started running crosstown in cowboy boots and polka dot overcoat, against the flow of marathoners. "Where's your number?" A couple of construction workers called out. "Ha!" I yelled over my shoulder.

I darted through an intersection, dodged appropriately-dressed runners, sprinted up a sidewalk, skimmed closely past several families and picked up my tickets from will call. Because my adrenaline hadn't yet abated, I also ran up the lobby's majestic and sweeping staircase. I saw a little girl in tiara, leotard, and tutu bawling her eyes out on a sofa while her mom talked to her in undertones. I showed my ticket to the usher and then ran up, two steps at a time, another staircase to the mezzanine. Once I found my seat, I wiped the sweat from my forehead and looked around.

Every single other person in the theater was under the age of ten and accompanied by a parental-looking type. The usher came over to me and said, "I don't think you got one of these," and handed me a temporary tattoo.

"Thank you," I replied and continued to scope the scene for clues as to what I'd gotten myself into.

Five inches behind my head, two girls played pattycake. Kids skipped through the aisles and bounced in their seats, wailing to the adults, "When is it going to staaart? I want to see Baaarbie!"

I observed a potential showdown on the stairs when a girl wearing gauzy fairy wings passed a girl holding a Barbie. They stopped and fixed a look on each other. I leaned forward and tried gauge the intensity of the standoff but the adults hustled the girls on and the moment passed.

I remembered my own brief history with Barbie and how, even then, I had no business going to Barbie Live!, much less now. In 1982 I declared that I wanted a Pink 'n Pretty Barbie. My mom wouldn't buy her but if I saved my allowance she would permit Barbie in the house.

I saved my quarters and went to Kmart with $9.00, brought PNPB home, brushed her hair, fiddled with her shoes, and put her down. I didn't touch her again until I could play with someone who also had a Barbie and we could make them have sex. Even that titillation wasn't enough to keep me interested and I forgot about Barbie forever. 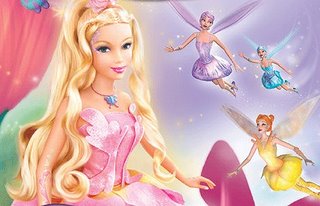 If I HAD maintained even the slightest interest I would have known that Fairytopia is a Barbie concept whereby Barbie is named Alina. Alina lives in the Magic Meadow. She doesn't have wings and feels bad about that. She has a puffball friend named Bibble. Some fairies make fun of her for not having wings while other ones are nice and she learns that FRIENDS ARE PEOPLE WHO LOVE YOU. FRIEND DON'T TEASE. FRIENDS LIKE YOU THE WAY YOU ARE.

JUST THINK OF ALL THE LOVE YOU'LL GET FROM THE FRIENDS YOU HAVEN'T MET.

Sing this out loud 30 times and you'll understand what I went through.

The only adult joke in Barbie Live! was the fairies trying to use their cell phones in the woods and complaining, "We never get service in the woods!" (Knowing chuckle from the deeper voices in the audience). I want to kill myself.

At the end, after the evil enchantress was foiled, after the fairies made up, and after Alina got wings, I glimpsed the Barbie Live! potential. The cast came on stage and danced to a song I'm sure I've heard in a gay club. It was the first energy I'd witnessed on stage that wasn't simpering, exaggerated, and pukingly instructional. The fairies CUT LOOSE and finally made my day by clasping their hands in front of their chests and doing the wave.

"THIS is what the photographer and I were talking about," I thought. At the very least a peek at what could have been.
Posted by ronckytonk at 8:08 AM

OMFG. and i quote "sorry, i'm in a rush. i have to be somewhere in 20 minutes". little did i know you were off to fairyland. somehow seems fitting that your rush to mock (what you just don't understand) is rewarded with the living hell you must have experienced. tears in my ears. tears.

actually i said, "I have to DASH." I remember because afterwards I thought, since the hell when have I used the word DASH??

Hey, is that the perky polka dotted raincoat that I was not too long ago talked into buying for you?

mom. it was two years ago and I love it. I just have to be in a really upbeat mood to pull it off.