You know I'm your friend when I learn about golf

I've never been the least bit interested in golf. I've been more the opposite of interested, even, and have long held a negative view of the sport, associating it with old preppy businessmen who, between holes, drink martinis and share tips on how to keep their underpaid workers from unionizing. Not really my gig.

So imagine my plight when I found out that not only does Jimmy play golf, but TALKS about it. I thought it was a mistake the first time he threw around the terms "bogie" and "birdie" in my presence. I reminded him that I had no idea what he was talking about and then, reaching deep within myself, asked what those words meant.

He gave a quick explanation using other words that I didn't recognize - like par - and continued to tell me about his game while I concentrated on making eye contact and nodding.

Jimmy looked at me for a few seconds and said, "NICE" in a tone that suggested he felt my question insensitive.

Last Sunday morning in Columbus I was up early and drinking coffee in the living room when Rem shuffled out of the bedroom.

"What are you doing up so early?" I asked.

He sat at the table to join me for coffee and I asked him why he likes golf. I also told him that Jimmy tries to converse with me as if I get it when I don't.

Rem told me, "What you need is a cheat sheet."

He went into the kitchen, found a takeout menu, brought it back to the table, flipped it over, and told me we needed something to write with. I found an orange Sharpie in my bag and we went to work. 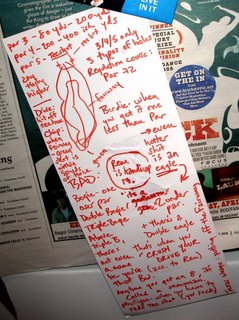 Rem dictated and I transcribed, in between tittering and clapping my hands. "This is GREAT!" I said, "I'm going to put this on his fridge as soon as I get to Austin and then run over and grab it when he starts up. THANK YOU."

I took my new found open-minded approach to golf a step further on Friday when Jimmy asked if I wanted to walk nine holes of the course.

I heartily agreed to since I'm learning not to be a hater, like walking, and love sunshine. Grass and trees are also not the most unpleasant things in the world.

I put on my approximation of what one wears on the greens, bought a Bud Light at the clubhouse, and strode around the course for two and a half hours.

I wasn't sure how much had sunk in until yesterday when the Masters tournament was on television and I glanced at the screen. "He's hitting eleven under par?" I said with admiration, "HE'S GOOD."
Posted by ronckytonk at 9:22 PM

i am very very proud of you jess...

you're cool dude.
i've got this cute little pink and green belt with whales on it that goes over good in the clubhouse. you can borrow it.

how goes the tour?

I just wanted to let you know that I am "hotter than shit" because I got an "eagle" yesterday. Next time you're in Cincy I'll give you a free autograph.

Admit that the stroll on the course gave you fond memories of high school CC runs.

P.S. It's scotch, not martinis, and we talk about Kelly Pickler (A. Idol) between shots, not wages.

The "other" Jimmy you know

Who is this "other Jimmy"?! Please state your business. Thank you.