Since reporting on N's dramatic departure from Detroit and subsequent appearances in Ohio, I've received several comments and questions regarding N's current status:

1. Will I take N to other marquise to see if he makes friends with more letters?

2. Does N miss the Royal Oak Theater or does he yearn to see the world?

And so I feel obliged to reveal a couple of things.

N may have a little drinking problem. I'd like to think it has more to do with his new freedom rather than an innate desire to drink heavily and black out at family functions. Kind of like a sheltered college freshman who runs away from Provo, Utah and Brigham Young University and enrolls at UW-Madison and attends nightly keggers, I believe that eventually N will realize it's more fun to have a few cocktails and go to bed than spend hours hurling remnants of cheap beer into the toilet and wondering what happened between 2 and 4 am. I'm keeping an eye on the situation.

N has expressed NO DESIRE to go back to the Royal Oak or any other marquise, but he has hinted that a trip to the library might be nice. N felt limited by the theater, where he could only say so much, while the possibilities at a library are endless. As for his general demeanor: N is laid back to an unparalleled degree. He recently accompanied me to New York and took to the city with no complaints and even hung out on the stoop like a real Brooklynite. 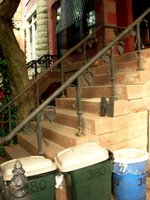 "N" would really like to visit the bezerkshires now. i am sure. xo hh