Yesterday I read Lisa London's blog and found that I made the list of her HARDCORE POSSE: BEST OF THE BEST. Woo!

Lisa is my former boss. We met shortly after I moved to New York and I answered her ad for a publishing internship at The Feminist Press.

Lisa returned my email and suggested that we meet to discuss the internship at Virgin Records in Union Square. Whoever arrived first was to go the Flaming Lips listening booth and put on track #4 from the Yoshimi Battles the Pink Robots album. 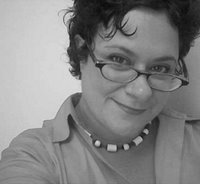 I showed up and this lady took the headphones off her ears, put them on mine, flashed a huge smile, and said, "Isn't it great?!"

I nodded and tried to look cool.

After spinning some yarn about how much energy and enthusiasm I'd devote to the internship, we were on. For the next two years, under Lisa's management, I appreciated a singularly killer mix of instruction, support, and hilarity.

"Lisa," I'd say after knocking on her office door, "Could we find something to meet about?"

Meaning: I'm all the way over in my own office and I miss you so maybe we could hang out and you don't mind if I put my feet up on your desk, do you? 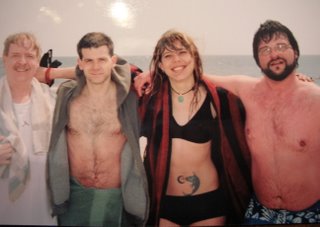 Lisa introduced me to the Coney Island Polar Bear Club and convinced me do jumping jacks on the beach and then run into the water to freeze my tits off. We laughed until we choked over imitating Klaus, an elderly German member of the Polar Bear Club.

It wasn't the skin-stinging, head-splitting, bone-aching cold that eventually drove me out of the water, it was Klaus and his guttural voice sidling up to me in the water with:

"It's bettah thahn an ORRRGAAAHSM!"

Lisa and I once had a competition to see who had the worst elementary school photo. Imagine our surprise when we discovered that we used to be IDENTICAL TWINS. 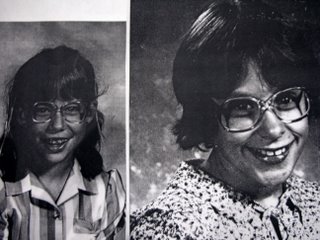 i just wonder- when you left the house that day, did you think- "i look GOOD!"? (cuz u do)

I think the expression on my face speaks for itself.

What do you mean,"ugliest elementary school picture"? You wery lovely and still are!

GURRRLLL. you are so in the hardcore posse. If i need to call the posse together tho, you need to respond. And these days I just might. Next december we should think about meeting klaus for a run into the sound.....you have to know i loved being your boss cause you were a fucking workhorse.....i am glad tho that we both beat it the f7^%k out of there before it really hit the fan...oh wait, that was only me..... love you

Aww, totally reminds me of the glory days when I was YOUR intern! Holla back, yo! Love, LA Sav