Last week I was drinking pints of beer at Leny's Tavern and catching up with my friend Jon. I had sprinted two blocks from Jane's house to the bar and abandoned Seema, our other high school friend in Seattle to celebrate Jane's graduation, with a wave of my hand and a slam of the screen door.

Around my fourth Bud Light, Chris Kelly showed up, plunked himself on the bar stool at my side, and invited me to the Duck Dodge. 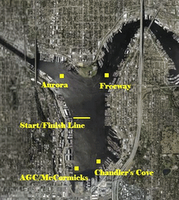 Jon said I should definitely go. "It's great," he said, "a sailboat race around Lake Union." Piece of cake, lots of fun, etc.

The name Duck Dodge is taken from Race Rule 12: Never make a duck change its course. Several people now realize Rule 13 should be THINK CAREFULLY BEFORE LETTING ME JOIN YOUR CREW, but Jon (boat-maker who blithely sails to the South Pacific) and Chris (as boundlessly cheerful and plucky as a golden retriever puppy) assured me it was a superb idea.

Chris and I scooped up Seema and headed to the lake.

Navigating the creaking planks of the dock, I resisted the urge to walk with both arms extended for balance. I greeted the real sailors with raised palm and wide smile and hoped that bravado and a deep sense of inner confidence would mask my heavy buzz. Seema and I exchanged glances and lingered on the dock for a moment before awkwardly straddling the railing of the deck and thudding onto the other side. 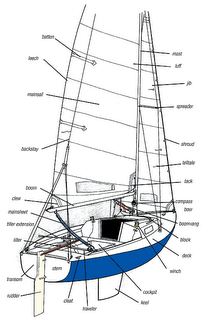 Once aboard, Seema and I chose distinct coping mechanisms. Chris offered us each Pacificos and Seema nodded quickly and practically dove headfirst into the galley to find a bottle opener. I, on the other hand, shook my head and harbored suspicions that my pupils were, in fear, as dilated as a high schooler on an acid binge.

Seema and I attempted to lean against the sides of the cockpit and give off airs of casual ease. The fact that we didn't understand any of the sailor lingo being exchanged and were perpetually blocking someone and scooting out of the way with little "Sorry! Sorry!"s didn't help our skit.

Chris told us to just follow directions once the race got underway and I felt suddenly compelled to come clean to the others and announce that I not only have never raced but don't sail at all. I needed to know that no one was going to scream at me to tie a loop knot or a double loop bowline at a crucial point in the race. I needed the directions to be VERY CLEAR and in LANDLUBBER ENGLISH.

The others assured us we'd both just crouch mid-boat under the mainsail and scramble underneath the boom from side (port) to side (starboard) when ordered. They also said to take care not to knock our heads on the swinging boom and get concussions. 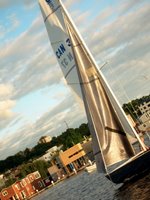 The Duck Dodge happens every week from mid-May through September. We showed up on Pajama Night but our entire crew forgot to wear their PJ's. Hopefully they won't be so neglectful on Prom Night and Pirate Night scheduled for later this summer.

Shortly after the start of the race, I learned several things. I learned that it is impossible to not know when it's time to dive underneath the boom to the other side. When the boat tacks and the angle of the deck shifts drastically, you don't need an order to GET YOUR ASS MOVING, regardless of the excessive bruising that you shall suffer later.

I learned to immediately start cursing our arch-rival, a red boat named Minor Threat, who won the race. I learned that sailing is super relaxing when you aren't sustaining a sudden gust of wind while rounding a buoy, losing control of the sails and rudder and nearly capsizing. 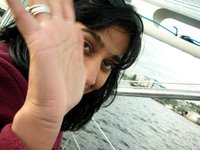 And I learned that the rest of the time you can pretty much hang over the side and listen to others read the water and announce oncoming winds, "Puff. Puff on." It's mildly amusing to imitate the real sailors by saying languorously to each other, "Puff on, Seema" and "Puff on, Jess" while trying to make yourself look as high as possible. 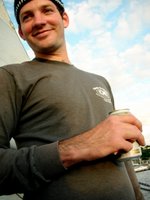 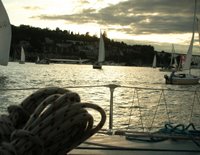 Posted by ronckytonk at 6:14 PM

i think the description of chris as an excited puppy is the BEST.