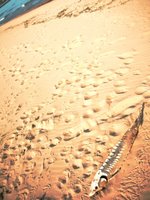 Gail and I spent the day in Duluth, Minnesota walking on the beach, sitting on driftwood, and sharing giant pieces of chocolate. 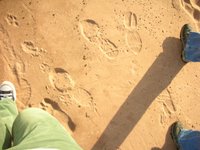 We drove Diana, the dark green huntress Toyota, from Ironton to Duluth in the late morning, timed carefully to coincide with baby naptime in the backseat. 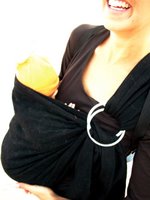 After dinner we headed home along MN-210, a dark narrow tree-lined state highway. Gail told me a story about hitting a deer on her way to school, how the accident tore up her car and made her cry on the side of the road.

We were quiet for a few minutes until we passed three cars pulled off the highway.

'Why do you think those cars are pulled over?' Gail asked me.

'I dunno,' I mumbled right before we saw it and there was no time to slow down and avoid it: a bloody pink and red heap of fleshy carcass in the road. Diana's right side slammed into the animal and jolted us hard two times, one for the front wheel and one for the back, while I yelled, 'FUCK!' and Gail gripped the steering wheel.

'Fuckfuckfuck,' I repeated while pulling my feet off the dashboard and twisting around in the seat to see if the baby was awake.

'Well, I guess the lesson here is slow down when you see a bunch of cars pulled over?' Gail said.

The next morning Dave left us a phone message after he left the house for work: 'Hey guys, uh, you might want to think about getting the car washed, considering one side of it is COVERED IN BLOOD. Yeah, that doesn't look too good. Just a thought.' 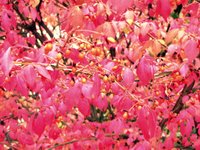 I ran outside to inspect the deer remains splashed across the hood and wheels and, on the way, noticed a bush in the front yard whose leaves were turning a striking pink on their way to dying and falling to the ground. 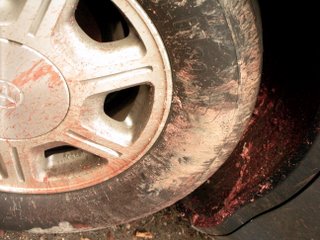 Posted by ronckytonk at 3:24 PM