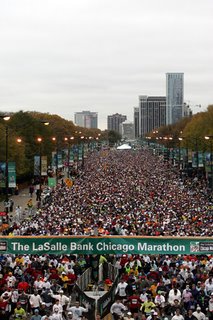 I have a cousin named Lauren. This past Sunday she kinda sorta accidentally ran the Chicago Marathon.

As in 26.2 miles. As in she promised a friend that she'd start the race with her and see how far she got before dropping out. Lauren got her booty downtown at 8am, withstood the wintry temperatures with 40,000 other maniacs, and then just happened to keep running for the next four hours.

If I wanted to get specific about it, which, GUESS WHAT I DO, I would point out that this means Lauren's feet hit the pavement something like 52,400 times in succession. Fifty-two thousand four hundred times. WITHOUT REALLY TRAINING.

Of the blood we share and the gene pool of which we are both a part, I want to ask: What do you have against me? Why does it take me a minimum of three hours everyday to prepare for the journey from my down comforter to the world outside? Why, when Lauren sent me a text message Saturday night asking if I was going to watch the marathon the next morning, did I laugh so hard?

Furthermore, DNA, I cannot have helped but notice over the years that Lauren has an incomparable temperament. She is unflaggingly cheerful and positive. She maintains her sparkling effervescence in the face of the most dire circumstances - things like Christmas and marathons. I was at her house two Christmas seasons ago and personally witnessed Lauren singing carols while vacuuming.

GENUINELY BELTING OUT RUDOLPH THE RED NOSED REINDEER OVER THE NOISE OF THE SWEEPER.

I think it goes without saying that this gave me pause. I admire what I don't understand, what I myself cannot experience. 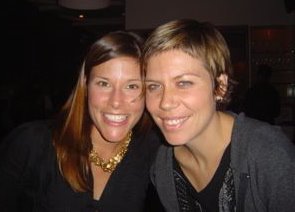 This is a recent photo of me and Lauren. Notice the exuberance and liveliness in her smile. This is exactly what she looked like when she answered her door on Sunday afternoon. I surprised her at her house because I was in the neighborhood. I didn't know her feet had just been subjected to the ground in excess of 52,000 times. I came over to invite her and her feet to dinner.

I laid on her couch and listened to Lauren tell me happily that she didn't know how she did it, how she felt great, and how her sister-in-law, Miriam, told her on the phone that she never wanted to speak to her again, which I think totally befits the situation.

"Well, I was going to invite you go out to eat with a group of us tonight but I understand if you aren't up to it," I ventured.

"No, I'll go," she replied, and then proceeded to drive us around in her big truck, drink beer, and carry on like the champ that she is.
Posted by ronckytonk at 7:37 PM

Labels: are you f'in serious?, Chicago

teta, i feel the same exact way. she call me and i think i exclaimed, "what were you thinking!"

I agree with mb2. Your hair looks great, Teta, but I'm not telling your running guru dad about your comments on the Chicago marathon!

i call bullshit on you b/c i have witnessed your running prowess on too many occassions. you say yer gonna run for 20 minutes and end up sprinting for an hr. shut it.

i see i have a reader who is just as bitter as me. hello. oh and you're kind of chickenshit: "anonymous".