At least I pay the rent

In January 2003, the Illinois Tollway began a Violation Enforcement System to crack down on toll scofflaws in order to remind the 97 percent of law-abiding Tollway customers who pay their fair share that they are BETTER THAN THE REST OF US. Illinois wants to reduce the amount of uncollected tolls and thinks this will happen once scofflaws realize that there are penalties for driving through tolls without paying.

I know this because I TOTALLY NOT ON PURPOSE joined the ranks of the three percent of Illinois drivers who drive through without tossing the required coins into the basket - 30 cents in my case - thereby flouting or "scoffing" the law. 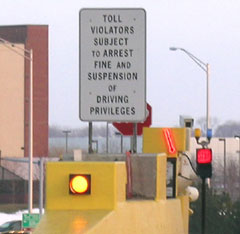 And while I really don't think my inability to scrape together 30 cents from every pants and jacket pocket I could rifle through without getting in an accident makes me exactly public enemy number one, I got all shitty and nervous because I borrowed Shane's car to drive to the Bob Dylan concert and I caught the sign clearly stating that I had to call a certain number within four days, or else.

I suspected that surveillance cameras had already taken photos of me and the Nissan, photos which were being beamed to the state patrol who were typing up a warrant for Shane's arrest - or at least a ticket - to be delivered on day five. And that this would make me a bad roommate. 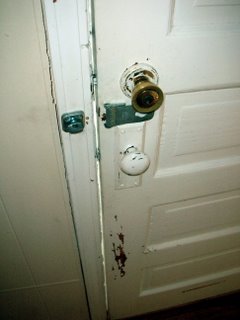 Especially if you bear in mind that 1) Shane hasn't had a roommate since 1992 because 2) THAT'S HOW MUCH HE HATES ROOMMATES and 3) I just moved in with him and his wife/my oldest friend Sunny and 4) this was the same day that I got locked in the bathroom and, in my panic, threw my weight against the door hard enough to break free, taking all the molding from the left side of the door with me.

You will see in the photo a long vertical crack running the length of the wall. Sunny tried to disguise this evidence of my hulkish nature by propping and nailing the wood back up after she got the note I left on the kitchen table:

SO SORRY ABOUT BUSTING THE DOOR DOWN. XX

I wrote Nissan's license plate number in my notebook and went online to look at maps of I-90 to figure out at which toll plaza I had scoffed the law. After deciding it was westbound Route 59, I identified the car and the time of the incident and put the 30 cents on my debit card. Last night I also tried to kiss up a little bit by drawing hearts on the envelope with my share of the rent.
Posted by ronckytonk at 8:36 PM

Only You...well, maybe me too. Nice work on the door and I'm glad that your good Ole Catholic Guilt stills plays such a big part of your life.

Hmm... this bathroom incident reminds me of another. Fortunately, little Teta was not so hulkish then and the door frame was spared!