I told Jane that I spent two hours in a clog store and her response was, 'OH, DEAR GOD.'

So I tried to defend myself.

I was in the store for two hours because I was busy talking to the Swedish owner about her hometown of Gothenburg, which I've been to, and whenever I get the chance to say Gothenburg in Swedish, 'Yetehbooooooreh,' I take it.

I was also shooting the shit about how my foot pronates. Which, while not exactly thrilling, was satisfying in a way that only the spawn of Bob Roncker's Running Spot would understand.

I was also mes-mer-i-z-ed by the clogs.

I realize that even with every color and style possible, clogs might still be a tough sell. Last time I checked, Swedish people used them mainly for gardening. But to Jane I said, 'Don't forget the chefs! And hospital workers! They're wearing the hell out of clogs. All across America!'

I knew I was skating on extraordinarily thin ice because if I was going there, I was potentially associating myself with those checkered tapered wrestling-type pants that chefs also wear and THAT would be an issue. That would be what I call an indefensible argument.

Unless it's Halloween and you're also wearing a long blond mullet wig with a bunch of feathers behind your ears like Dog the Bounty Hunter. And actually it's still a bad idea. 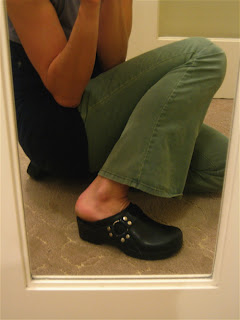 But I didn't care. Because the clogs I picked out are BIKER CLOGS.

That right. That's what I'm about: Fucking up a genre, a FOOTWEAR GENRE. And maybe other genres, too, I don't know.

What you can't see so well in this photo is that the biker strap, the one that signals how tough I am, is made of blue patent leather. OMG, as they say.

These clogs remind me of the girl who told me in tenth grade that she couldn't figure me out because I seemed a little punky, a little crunchy, a little nerdy, and a little sporty. I was dabbling in each teen stereotype and I remember thinking that if she was confused, to consider how I felt. Like I knew where I fit in.

I also wonder if the fact that no one can figure out my Spice name right now might not also apply. My colleagues and I are all getting our own Spice names and some of them have stuck. Mine keeps changing.

There are moments where my name makes sense, like when I woke up after having eaten everything in the minibar and thought, 'I feel like Shitty Spice,' but that didn't last. Plus we're not allowed to name ourselves. Our Spice names must MANIFEST.

Max, displaying much insight for someone who doesn't know me well, suggested Sarcastic Spice. I tried to go with a temporary Mystery Spice, but our director became jealous and immediately crushed it since Mystery Spice sounds kind of sexy and she's having enough trouble fighting her own Budget Spice (AKA Tight Spice) without me batting any spicy eyelashes and making her feel bad.

She's now trying to peg me with a retaliation Junkie Spice which is unfair mainly because I'm not a junkie. Junkies don't wear clogs. Please.
Posted by ronckytonk at 1:04 AM

You know you have a problem when you show yer friend yer clogs and then DIFFERENT clogs end up in the blog. These blog clogs are NOT boots/cloots.

THESE clogs (the ones with the OMG patent blue leather strap) either:

I'm not liking your options very much.

this was going to happen eventually so i'm not going to lie or hide from the truth.

the biker clogs were on order when you were here. The clogboots/bloots/cloots that i showed you in the closet, the ones that you admitted were totally cute and you shouldn't have been so abusive to me on the phone about, were the only ones i had AT THE TIME. i just didn't feel like talking about the bikerclogs yet.

and sunny, i know what you're yelling if you're reading this. i know that i'm never going to be able to buy a house if i keep buying boots. i'm done, i really am. i am ALL SET. I'm GOOD. can i have the number of your financial advisor friend in chicago again?

I think you should look in the yellow pages to see if there's a 12 step program for compulsive shoe buyers. Or maybe, since this is 2007, you could google it!

we have the same problem...i can't stop with the boots either. or the clogs for that matter. in fact, i am stretching my collection to include - heels. yes, that's right - heels. so fuck all the naysayers. you keep on getting shoes, boots, clogs.

yeeeeah i might have four pairs of heels in my closet (hotel closet, plus more in storage closet), chickey.

If you haven't completely detoxed from your clog addiction, pay a visit to my blog Every Clog Has Its Day. I'd love to feature a story of one of your own clog wearing experiences and provide a link to your blog so my readers can follow more of your exploits!