I recently got an email from my cousin Mary Beth who was reminiscing about the "totally rad" time we saw Last of the Mohicans 15 years ago.

I was a senior in high school and she was a freshman and thought it was super cool that we were hanging out together in downtown Chicago with my mom and my family's exchange student, Joanna.

I remember that night too, mainly because my mom spent most of the film annoying me by pulling her turtleneck up over her entire head and face during any scene involving bows, arrows or violence. She'd pull the turtleneck down after the scene, lean towards me and stage whisper, "WHAT HAPPENED?"

At the time, this was only slightly more galling than her crouching behind the couch during fight scenes and popping up later to whisper the same question. Because I kind of felt like you either had to take it or not watch it or just use your imagination. Not whisper about it. GOD, MOM.

Mary Beth also told me in her email that she was thinking about me because at Thanksgiving dinner she and Jeremy were chatting with my mom who mentioned that she thinks I use the word motherfucker too much. Apparently, though, my mom didn't exactly whisper the word. She straight up said it and my cousins laughed because it was a tiny bit weird to hear aunt Mary Ann throwing "motherfucker" around on the day of giving thanks.

Whereas I knew all along that she had it in her. 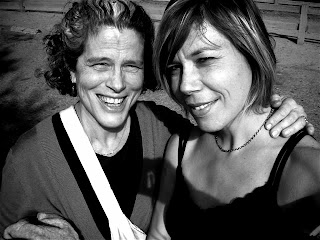 ha.
wish i could've heard that shit.
really tho, you just can't say motherfucker enough. it even feels good to write it, you know?