A few hours after I wrote about the so-called ghetto last week, I was going through old photos and found something. It is a photo of a diorama I made in sixth or seventh grade art class and I clearly spent some time constructing the simple three dimensional scene out of pieces of poster board and colored pencils. When I saw the photo the other day, though, I gaped because it is a homeless scene. I MADE A HOMELESS DIORAMA? I do not remember this but I'm not surprised. This diorama illustrates that my house may have been in Hyde Park but my school was in the hood. 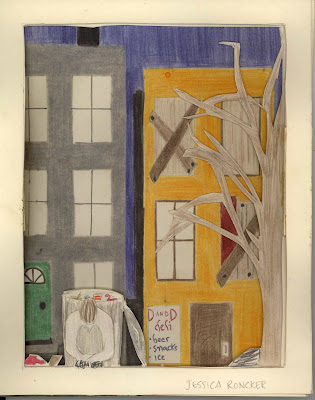 The D and D Deli was a store across the street from my elementary school, Sands Montessori. Sometimes, if I wasn't taking the bus home and my mom was picking me up, I was allowed to buy a snack at the D and D Deli, Lemonheads or Fritos or some such thing. I never did buy a giant pickle in a plastic pouch, bobbing in its own green-tinted juices, though I saw a lot cross the deli's threshold. Those pickles totally freaked me out.
Posted by ronckytonk at 5:42 PM

You never tried the pickles? If you would have wanted an authentic hood experience it would have been a pickle, a bag of bbq Grippo's and a Tahitian Treat! I loved SANDS! It gave Suburban kids a true city experience and I loved every minute of it...since i was a city kid who wanted to be suburban who wanted to be a city kid...I LOVED MONTESSORI!!!

Montessori brought us all together just like the Hands Across Sands event that we staged after Hands Across America. (Group hug) ps I did get Grippo's, yuuuummmmmm