Sometimes I think I want to blog about what I'm wearing and where I found it on clearance and what great shoes are cute and comfortable. I talk about these things to friends in real life. Then I imagine all the photos that people post of themselves when they blog about their style and I know that 90% of my shots would come out like this. 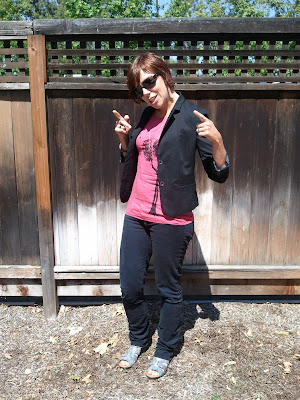 Let me explain what is going on with my face; because I am cocking finger pistols, I am also saying, "Chk-chk." And I can't stop even though Matthew pointed out that it isn't entirely necessary to SAY chk-chk when pretending that my hands are guns. Doesn't matter. Incidentally, this expression is very similar to my "smile" at the dentist's receptionist the other day when half my face was numb.

I took these photos outside of a deli in LA where we ate before heading down to the Idol TV finale. I wanted to show Robin and Kelly that I was wearing the awesome t-shirt they bought for me at the Sicilian Festival in San Diego and had given me the night before. 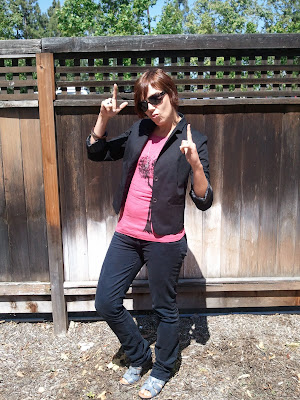 You can't really see the shirt but there is a tree and the tree is a person and their arms are trunks. It reminded them of the Berlin tree I have tattooed on my arm. In this photo I believe I think I'm sneaking up on someone. 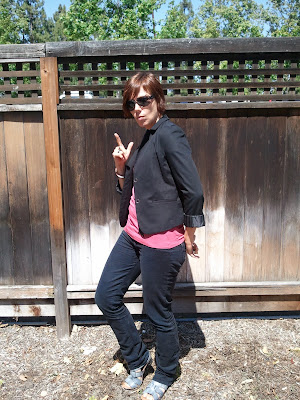 I have a hard time taking myself seriously in photos and am generally an inelegant subject. I can be going about my day perfectly gracefully but as soon as the camera is on me, I'm constipated. I don't know exactly what this means, besides the fact that I'm turning into my mother. Am I not as comfortable in my skin as I think I am? Hm. Something to think about.
Posted by ronckytonk at 1:42 PM