Patsy got her first taste of bacon when a woman working at a drive-thru gave her a piece through the car window. Since that day, she gets visibly amped when we go through drive-thrus, pushing her head into the front seat and licking her lips. Yesterday we were watching The Colbert Report on TV when a bacon commercial came on. The dog, lazing across my lap, lifted her head and stared hard at the screen. "Are you seeing this?" Matthew and I asked each other. When the commercial was over, she turned away.  In the background of this photo, Colbert takes on the subject of the Supreme Court, marriage equality, and Bill O'Reilly-goat marriage. Patsy is ambivalent. 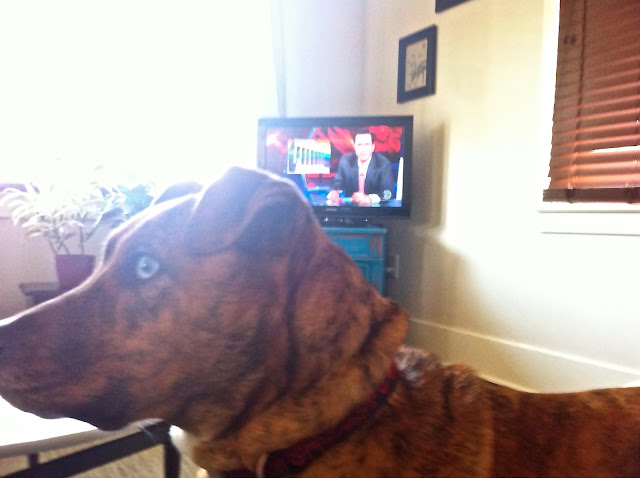 But I know for a fact she is supportive of homosexuality and not because she occasionally mounts other female dogs. Her dogsitters in Covington, KY, a female couple who lived in the apartment below us, used to take her to the lesbian bar where one of them worked and Patsy was cool with everyone there, with one exception. A man came in one day with an attitude and was being aggressive to the ladies. Patsy growled at him and may have chased him out the door though I might be embellishing. I HOPE she chased his ass out. Also: she happy-pees on her gay uncles when they come over to our house and it's pretty much standard for us to have a roll of paper towels in hand when we greet certain people at the door. Having said that, Patsy appears focused on bacon above all else.

Towards the end of the program, Colbert interviewed Carl Blake, an Iowa pig farmer who spoke of the new pig he is cross-breeding between Chinese pigs and Russian wild hogs. Cue commie pig joke by Colbert: predictable but still funny because Colbert is my favorite. I start smiling before he even says his first word of the show, "Nation..." I want to go drinking with him and Matthew wants them to play dungeons & dragons together. I think the three of us would make a great sort of gay trio. If his wife and kids are cool with that, of course. I don't support DOMA but I'm not trying to break up any marriages. In the final shots of the show, Colbert held a pig named Hamlet in his arms and looked who perked back up. 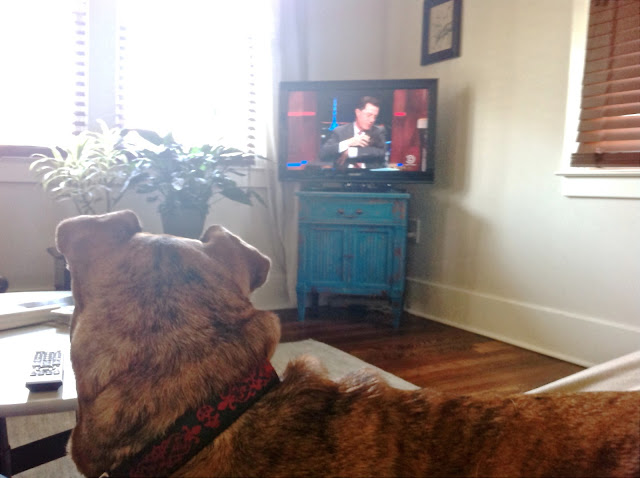 Posted by ronckytonk at 3:46 PM