Hello two days of fairs. Hello county fair in Allentown, Pennsylvania, which, after having walked around a bit seems a lot like a state fair with possibly more "freaks", as the fairs love to advertise. The fairs boast steers and goats and sheep with extra legs and horns and a midget bull with its midget face, none of which I enjoyed staring at because it felt mean. The giant horse - TALLER THAN BIGFOOT! - was in a space way too small for a giant horse and he blinked sad eyes. I'd rather not talk about the world's largest rat because I will have nightmares.

I'll just say that I doubt that 100-lb. rat is very happy to be caged, even if that cage is large. I know that rat was pissed because he was hunched over with his ass to the crowd and wouldn't look at anyone. That rat would definitely have given us all the finger if he could. Like I would if I were on display in a freak show.

Some of the freaks were fake. I'm talking about you, SNAKE GIRL. You are totally not a beautiful head of a girl named Angel with the body of a snake. You are an average-looking dishwater blond wearing Blues Brothers sunglasses, sitting in a box with your head poking up between a ceramic snake. How the fuck do you keep a straight face? 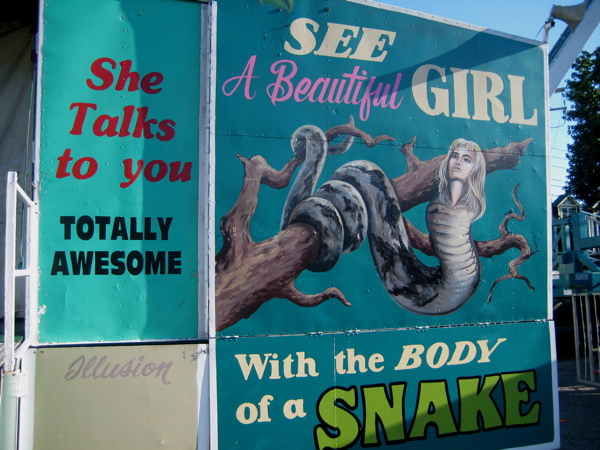 Posted by ronckytonk at 2:30 PM

Labels: are you f'in serious?, US