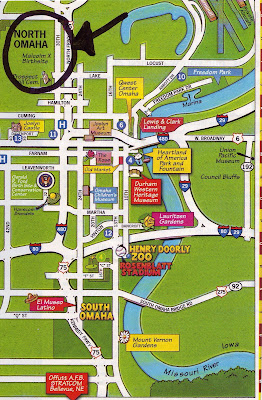 Earlier this month, I leafed through a visitors guide while waiting for luggage in the Omaha, Nebraska airport. Our group had flown from Salt Lake City, where we'd had a show the night before. We were headed into a day off and I was determined to make it memorable.

My eyes grazed over the map. Museums? Check. Parks? Great. Bluffs? Promising. And then there beneath the bold letters of NORTH OMAHA I saw: Malcolm X Birth site. Get out of here.

"Did you know Malcolm X was from Omaha?" I asked Neil.

"No wonder he hated white people," he replied.

"Damn," I said, one of my stock reply when I don't know what to say. (Others being "Wow" or simply laughing indecorously.)

"Well, he was. It says right here," I said. We wondered if his birth site memorial was big like the MLK, Jr. compound in Atlanta or small like the Black History Museum in Boise. We made jokes about there being just an X spray-painted on the ground and then we felt bad.

Like it isn't bad enough that Malcolm got past the racial violence inflicted on his family in childhood, got past his own crimes and years in prison, got past his years as a leader of the Nation of Islam, pissing off the US government and freaking out white people, got his ass to Mecca and got transformed by the potential of interracial unity, started speaking more positively and hopefully, and THEN got gunned down?

Considering I'm a shit who only knows who he is thanks to three incredible people: Ms. Harriet Russell, high school teacher; Spike Lee, filmmaker; and Alex Haley, author, I probably shouldn't make light of the fact that he might not be recognized fully for his importance as a leader in the history of civil rights? 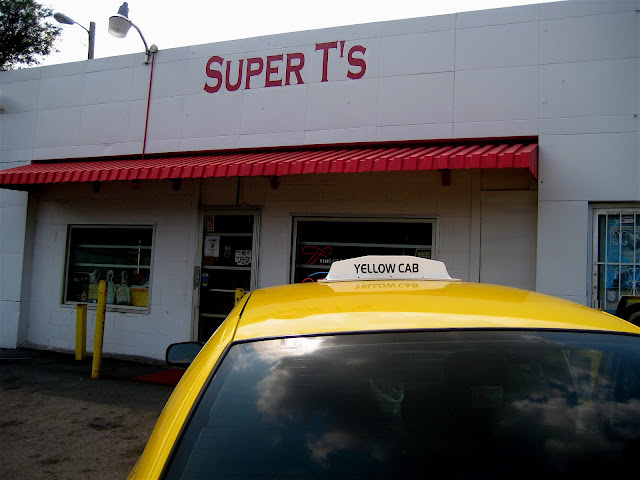 The next day Matt and I called a cab from the hotel and told the driver that we wanted to go to the Malcolm X site. The driver said okay, pulled away from the curb, paused a moment, and then asked us if we'd ever been there before.

"I have to remember how to get there," he replied. "It's been about two, three, years and maybe it's changed but there wasn't much there then."

The driver called his dispatch and asked for directions. A few minutes later dispatch called back and said she couldn't find the Malcolm X place on her computer. They had a screechy radio conversation back and forth about the address and he mocked her.

"She just learned how to use the internet...."

Matt and I looked at each other again. We pulled into the parking lot of a convenience store.

"You've GOT to be kidding me," I said, thinking it was the birth site. 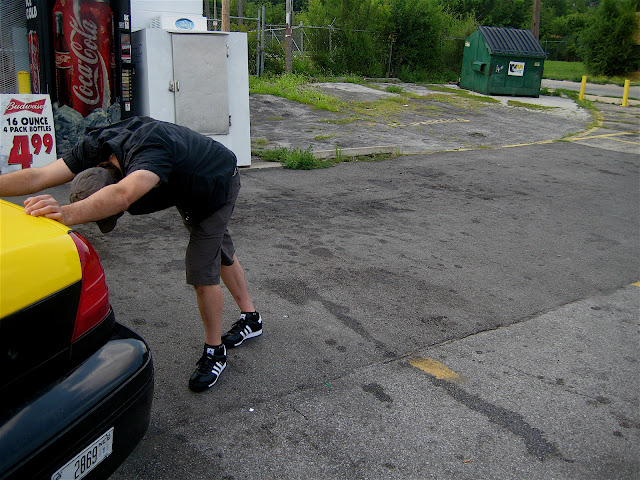 "This isn't it," the driver said. "We're just stopping for directions."

While he was inside, Matt and I ran around, stretched, and confirmed with each other that this was not looking good. We were not feeling the Malcolm X/Omaha pride. It seemed like maybe someone should have taken a cab to his birth site in the last few years. I'd seen it on the map with my own eyes and I remembered there being a corresponding website (that I had neglected to check). Why were we so lost? 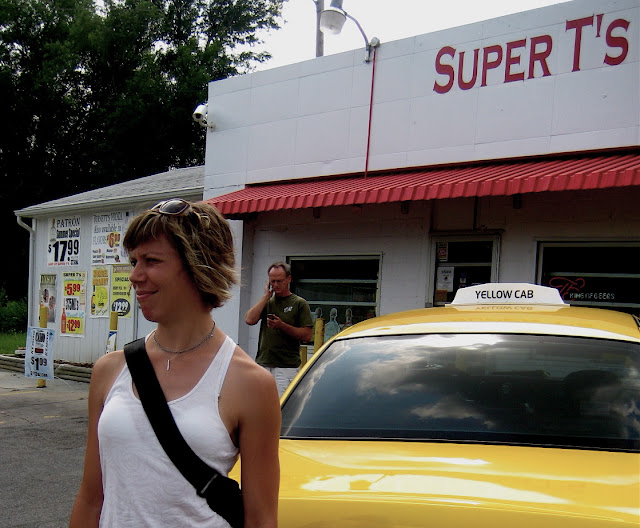 "Got it," the driver said. "I know where we're going." We jumped back into the backseat, slammed the doors, and wound through the North Omahan streets until we came to the corner of 36th Street and Pinkney Street. 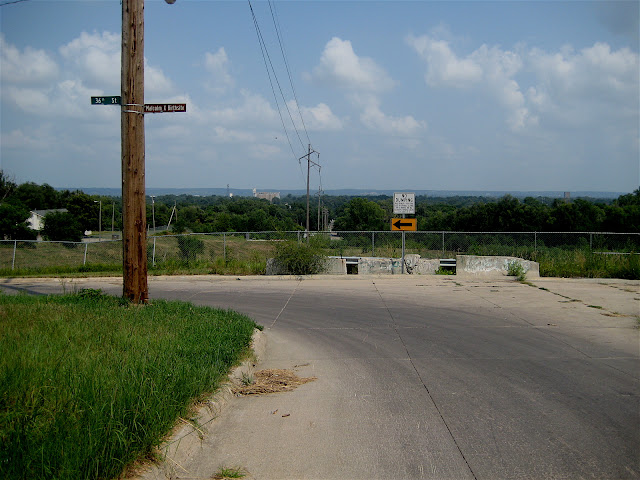 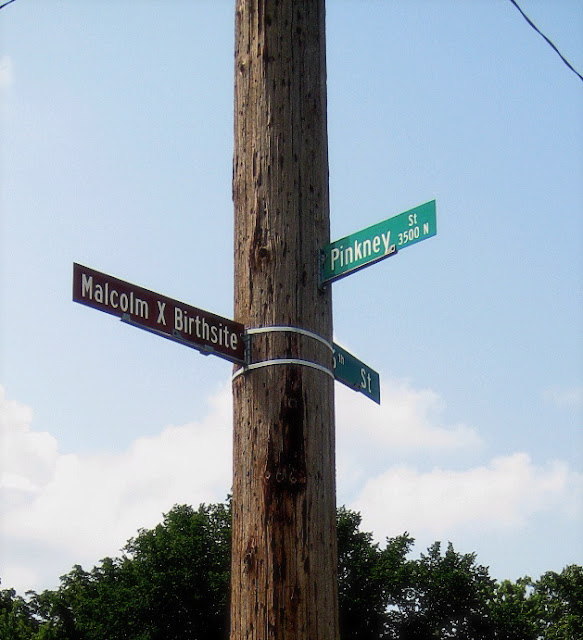 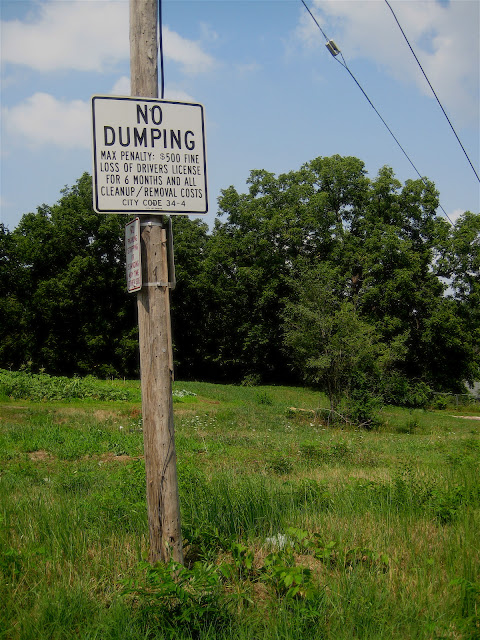 When I realized that the empty weedy lot with the NO DUMPING sign was our destination, I asked the cab driver to please wait while we walked around. Then I believe I unleashed a whole lot of damns and wows and indecorous laughter. Not because anything was funny; I was just floored. 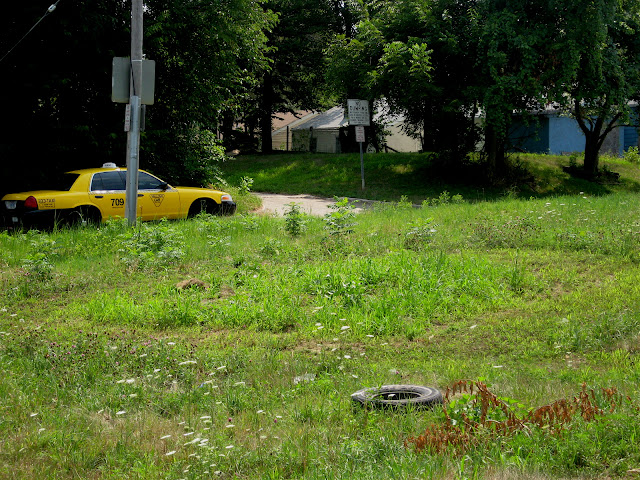 Having since read more about the corner lot, where the Little family lived shortly with their son Malcolm before they were violently threatened and run out of Omaha by the KKK, I can see why the city doesn't identify particularly strongly with their famous local.

The empty lot has actually come a long way in the years since the owner of the land, Rowena Moore, realized in 1970 whose land it once was and since it was listed on the National Register of Historic Places in 1984. While I didn't think NO DUMPING or the cardboard box or the discarded tire were especially nice touches, it has evidently been a lot worse.

Someone must care. There was a garden in the yard that someone looks after. The lot and surrounding acres belong to the Malcolm X Foundation now and they are planning a future community center on the land. They just, like most non-profits, don't appear to have any money. And it would not appear that the government or anyone else is really hooking them up.

I just keep picturing all those "rangers" I recently saw working at the MLK, Jr. site in Atlanta. There were tours of his home that were too packed for me to get onto and a museum and a gift shop. Maybe the contrast between the two men's memorials is as sharp as the contrast between their styles but I wouldn't go so far as to include their impact. And maybe I'm just naive but I'm still amazed. 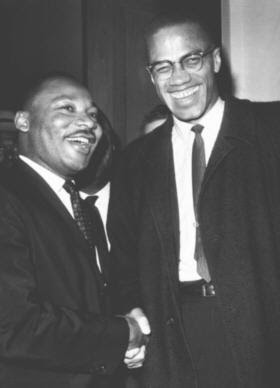 Posted by ronckytonk at 7:20 PM