We were wrapping up the Portland hotel check in when Matt asked if I wanted to get coffee.

Hello. Pacific Northwest. It would be UNPATRIOTIC not to get coffee.

I ran up to my room, took a birdbath (pits), and threw on a hoodie.

We stopped on the corner for a light. A girl cycled past in the bike lane wearing Dansko clogs and a North Face backpack. Pierced and studded kids outside Rite Aid asked us for money and when we didn't stop, they called us fascists. Unfazed, we went to a Starbucks.

I told Matt that in Seattle I'd give money to people on the street who'd end up in line behind me, ordering a triple shot specialty coffee way fancier than mine. In no way does living on the street in this part of the country mean you don't appreciate the finer things. And I like that.

Proving my point later in the day was the shaky, cracked out man at Whole Foods who asked me and Leila for change to buy LOBSTER BISQUE. Hee.

"Is there a fascist seating section?" Matt and I wondered outside Starbucks.

We sat on the brick steps of a plaza, taking in the sun after an 10-hour drive. A group of women milled around. Three of them were pregnant and one wore a pink garter belt.

"What is this?" I asked, "Some pregnant field trip?"

We watched silently as they stood and smiled at each other. We continued to stare. Matt raised his hand and pretended to call on himself. "You, in the striped shirt, with the attitude, you have a question?"

One of the women started piling toilet paper on the other's head and as it began to take form as a veil, I got it.

"Remind me not to have a bachelorette party someday," I grumbled.

We turned away and talked amongst ourselves and forgot about the ladies until the one with toilet paper on her head walked over. "I'm sorry!" She said, "But I have to practice walking down the aisle and need a man to practice with. Would you?" 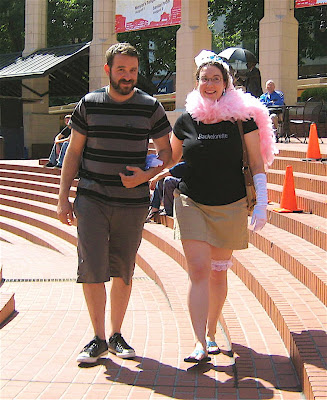 Posted by ronckytonk at 3:06 PM

Labels: are you f'in serious?, coffee, for yer consideration, travel