I told Halle I was moving to the Kentucky side of the river and she said she'd send me a Barack Obama postcard. "Do you think they'll deliver it?" She asked.

"I don't know," I said. "Let's do a series of tests. After Barack, try the Grand Dragon or whatever the KKK leader is called and maybe the Pope and we'll see who gets through."

The first piece of mail I received at my place was from Halle. Heartwarming. No current resident bullshit or offers on cable installation. That would come later. That first piece of mail was a large envelope containing the Rock Obama mix. The CD was called Ronckytonk Meets Kentucky and I reflected that my name and my new state have a lot of letters in common. Neat. It's like I'm cosmically destined to live here or something.

The website www.covingtonky.com has the same effect on me. Covingtonky! Oh, and the new license plates and the sign on the bridges spanning the Ohio River that welcome you to Kentucky with its slogan: UNBRIDLED SPIRIT. This is all very uplifting to me. I try to work the words unbridled spirit into conversation at least once a day.

So Barack was delivered but it didn't count because he was hidden inside the envelope. A week or two later, Halle leaves a voicemail wanting to know if the postcard that said FUCK in big letters on it made it to my mailbox.

Negative. I called her back, "Kentucky has censored you."

"What!" Halle is pissed. "I loved that postcard." 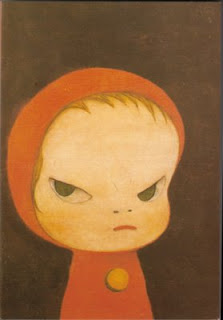 The postcard which may or may not have been unceremoniously ripped up and tossed into a dumpster where trash and filth belong was by Japanese artist Yoshitomo Nara who creates awesomely demented-looking children and said in full, "FUCK! I MISS YOU."

So I kind of feel like the overall message should have outweighed the coarse language in the eyes of the postal carrier. But I'd probably only work for the government for a total of 15 minutes before they would find a reason to fire me, so whatever.
Posted by ronckytonk at 1:49 PM