This one goes out to Hugo

I used to think I wasn't an animal person but then wrote about how I formed a heartbreaking attachment to Liz's cats in Seattle. Maybe I'm choosy - I like cats mainly when they act like dogs and I'm drawn to dogs with short hair and eccentric, particular habits.

I just thought I wasn't into animals since, as a girl, I didn't live for summer horse camp or go through a veterinarian phase. But I sponsored a chicken in high school! PETA sent me a chicken photo in a cheap frame for me to look at and feel good about saving it from the food factory on the off chance that that wasn't a complete scam.

And there was also that wolf behind bars at a Minnesota zoo. We locked eyes and mine filled with tears because I thought the wolf looked miserable. It was an odd, sad, slightly embarrassing moment.

I guess I just didn't used to consider pets full-on family members. Just as whiny children get on my nerves, I didn't understand relentlessly begging dogs and overindulgent pet owners. You're letting a butt-sniffing terrier tell you what time it is? Are you stupid? Okay, I still feel my uterus roll over and play dead around bratty kids but I've become hugely susceptible to the charms of funny dogs.

Dogs are often, and rightfully so, fiercely loved members of families. I'm not really in the mood to admit this but I recently watched part of Marley & Me on a plane and while it was predictable overall and the opposite of earth shattering, I had to will myself not to choke up during the scene where Owen Wilson takes Marley to the vet and we know it's time for Marley to die.

Even worse, when Owen first finds Marley immobile under a tree in the rain and carries him home, we know that something is really wrong. The scene reminded me of my family's old dog, Bingo, who when she knew she was dying crept beneath a bush in the backyard.

To avoid weeping on the plane, I resumed my silent, vicious, passive aggressive battle for control over the armrest with the space-hogging girl sitting to my right. In the end I don't know who won but at least I didn't cry. 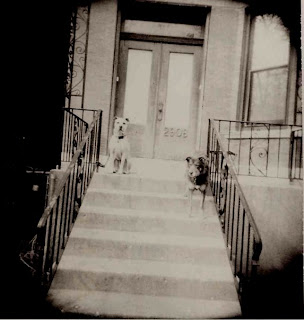 In Chicago last week, I filled Matthew in on Sunny and Shane's dogs. Lulu is the pitbull who slept in bed with me and stretched out like a human with her head on my pillow. Lulu's the one who jumps on you, pushes you off the mattress while you sleep, and steals Hugo's food.

Hugo is a good dog and a matchmaker, too. Shane was walking Hugo in Wicker Park when he met Sunny and I wouldn't be surprised if Hugo quietly pulled Shane in her direction. Sunny was walking her old dog, Zonner Rae, so Hugo didn't know he'd have Lulu to deal with later but that's beside the point. 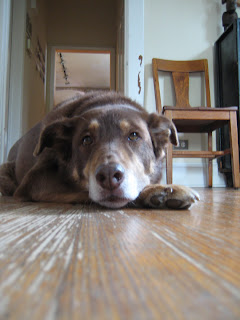 Two years ago I lived in Sunny and Shane's front room that's about to be the baby's room. This was before Shane put up doors so at night Lulu would slink through the curtains to cuddle/assert her authority. I'd try to give Hugo room to hang out, too; I'd pat the bed and call to him, "C'mon, Hugey," but he was reserved.

Hugo would lick my hand a few times OR obsessively until I'd make him stop, give me a nice long stare and then would go back to chill in the living room or Shane's office.

Every night, though, before Hugo went to sleep, he stuck his head around the curtain to check on me. I felt like I had a babysitter, a babysitter with a very long brown face. He reminded me of a schoolmistress or one of the nuns from the Madeleine books. When my situation checked out AKA I was sitting there reading a book, Hugo would retract his head and I'd hear him settling down in the other room. 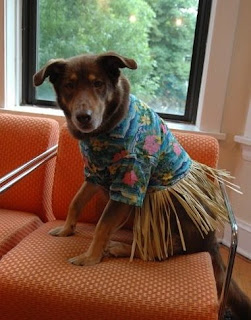 The last time I saw Hugo he was moving slowly. He'd stopped eating his dog food and had become partial to expensive sausages from the deli which is kind of awesome because he wasn't a diva before. He had his own prescription card from Walgreen's and though he was still up to go to the beach, Shane had to carry him up and down the stairs.

Last Sunday Sunny told me what a hard time he'd had moving around at the beach that afternoon. She sounded tired, and sad, and she said they were going to talk to the vet the next day. In short, it was Hugo's last luau.

R.I.P Hugo Dubow. We miss you. 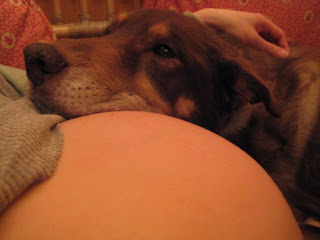 Posted by ronckytonk at 9:00 AM

I'll have to send you a more recent pic of the cats, hope all is well.
Liz

you are so awesome.

i love you for that.

hi, i am trying to reconnect with sunny neater, this is john calder in tucson...do u happen to know her email or could u forward mine to her, its hipsterj@hotmail.com thank you!