The Iceland Airwaves music festival was the week that we were in Iceland but when we checked online, it was completely sold out.

Well, we reasoned, there are plenty of free off-venue performances. We'll still catch some shows and save some money, nice since Iceland is so expensive you practically have to take out a loan to buy a hot dog.

Our hotel was an hour and a half outside of the city and midway through our trip we drove back in to Reykjavik. It was windy and overcast, threatening to rain. We puttered around bookstores and shops and got jacked up on excellent coffee made by the black-haired barista at C is for Cookie. 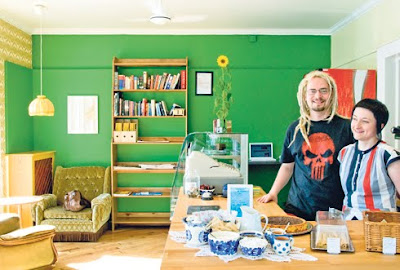 From reading the article about C is for Cookie in The Grapevine, I now know that our barista and her husband own the coffeeshop and are both Polish librarians. LOVE THAT.

We sat in the coffeeshop reading and Matthew came across an interview with the band Go-Go Darkness. Asked what they recommend in Iceland, they said that they're anti-social and don't listen to what people tell them to see and do but Icelandic Fish & Chips is a good place to eat. Sold!

After halibut, salad, potatoes, and skyronnes - dipping sauces made from the criminally tasty Skyr yogurt - we almost cried of happiness. We were so fat and satisfied that we decided to forgo music that night and return Friday instead.

See, it was maybe 9 pm and the streets were still quiet. By all accounts the city gets going at midnight and from then until sunrise you can expect to witness and partake, if you're so inclined, in excessive drinking, public puking, and random sex AKA the Icelandic way of life.

I'd also read in the descriptions of clubs and bars that one of them is popular with "the older set (35+)". "Agh!" I shrieked, "I'm in the older set!" Apparently I'm harboring issues with aging. It's taking me a bit by surprise. But as part of the older set, I was perfectly happy to leave early and drive home that night, something I should mention is easier said than done.

The main road, Route 1, is lit leaving Reykjavik. Fairly soon, however, the lights disappear for just reflectors on the side of the road. And this is fine, I'm sure, when you are used to negotiating mountain passes in the pitch black rain and fog. It gave me a severe case of the creeps. Matthew gripped the wheel and I got real quiet. Intermittently I'd whisper, "You're doing a really good job," and then shut up again. Later, when we were out of the hills and down in flat valley ground, we felt safe enough to emote as poetically as we could.

"Fuck, that was fucked up!"

Twice, actually, we drove the death-grip home and after the second time reconsidered Friday night. We wouldn't enjoy the music or a drink if there were any clouds or rain, we'd just worry about plunging off cliffs. With a lump in my throat, I canceled our last night at the peaceful ranch hotel out in the middle of nowhere and booked a room in the city.

On Friday we went to a bar where the Danish band Alcoholic Faith Mission was playing a free show and we ordered beers and shots of Brennivín, Icelandic schnapps also referred to as black death. 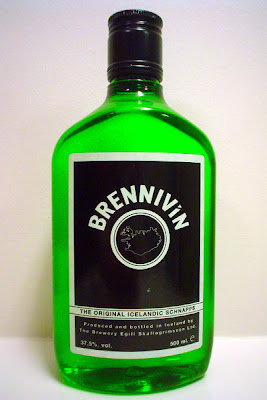 Black death. So smooth. So friendly.

We didn't know anything about Alcoholic Faith Mission and I expected something hard-edged, rough around the edges. They were, in fact, melodic and I fell for them hard. They had fun on stage, we had fun, and except for when I wanted to punch the smart-ass American kid in the audience who wouldn't shut up for the love of god, all was good.

I would have bought their CD after the show but I was too busy getting another shot of Brennivin which was secretly kicking my butt. It was such a big secret, I had no idea until Matthew - who was also secretly getting hammered - and I were basically skipping down the sidewalk, flashing photos and shoving pizza and hot dogs in our mouths.

I bought their music online when I got home and it sounds nowhere near as raw as live but I'd much prefer a band that I know is truest when they're playing for people and not just the result of studio production.

The man in this video is the lead singer.

I still want to know where I can get one of those stuffed rats...