Oh, I am so happy to be part of a couple who got married in Vegas and has lasted a YEAR. And if you think I'm being facetious, you should have seen the other people in line to get their marriage licenses. Yeee-ow! I've never felt so legit.

A year ago, we drove from Utah to Las Vegas. I was working at a concert on New Year's Eve and we weren't planning to get married even though we'd cracked a couple of jokes about it. 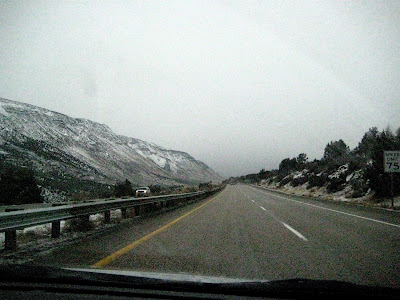 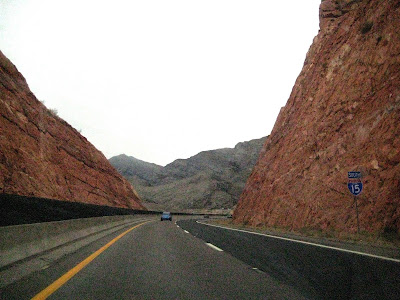 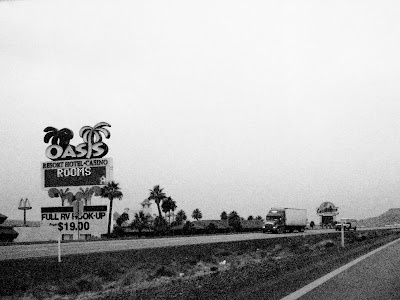 After the New Year's show at Mandalay Bay, where a "beach" was constructed outside and the performers onstage sang in summer clothes for the TV and pretended like they weren't cold even though all of us backstage had on puffy coats, Matthew and I had drinks with the band.

At one point I was forcibly bullied into drinking a lemon drop shot, the main reason I'd recently puked on Sara's daughter's dollhouse, and Matthew fell down a grand sweeping staircase at the casino. Full on ass over heel somersaults. Basically, for the first ever, I went to Vegas and actually acted like I was in Vegas. When we got back to the hotel room, I sent Allison a text, "If we got married by Elvis tomorrow, would you be our witness?"

And we did too. 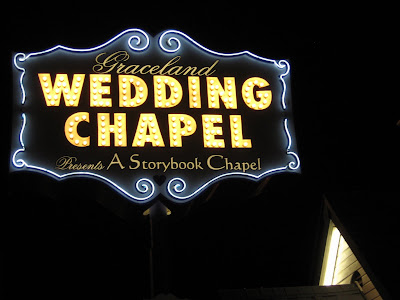 We called the Graceland Chapel in the morning on Jan 1 and they had times open at 8:45 and 10:15 pm that night. We chose 8:45. We also chose red roses and to have a DVD recorded of the ceremony. We had to get our license and be at the chapel on time since they schedule weddings every 15 minutes. If you're late, you're out of luck. Elvis sang "Love Me Tender" as he walked me down the aisle. He was a really cool dude. 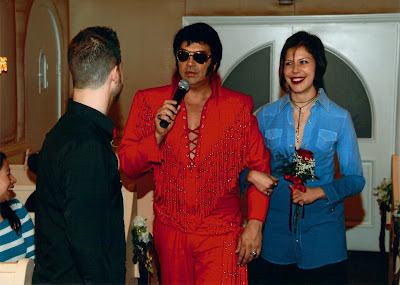 It wasn't until Elvis handed me off to Matthew and the minister took over that it all started to sink in for me. This is serious. And real. What you can't see in this photo is how my whole body is trembling. 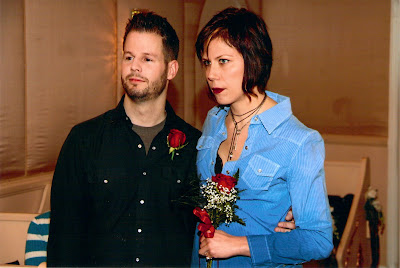 It all went by quickly, mainly because the entire event was just over four minutes long. We exchanged rings, pledged our love, I kissed Matthew all over his face, making him look ridiculous since I was wearing red lipstick, and Elvis jumped back up to sing "Viva Las Vegas". Our four guests also jumped out of their seat to clap and dance. That was fun. 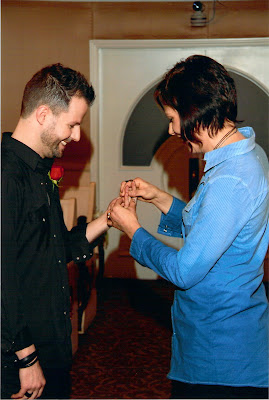 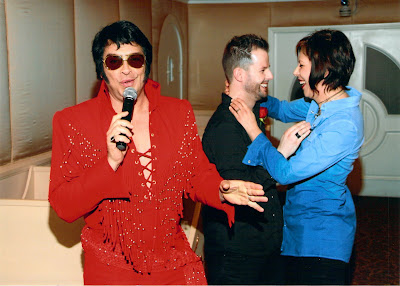 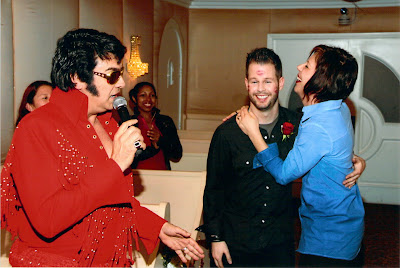 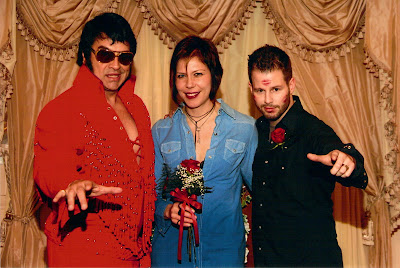 After the paparazzi-style photo shoot, they pushed us out the side door, ushered a new couple in through the front and that was that. We're legal! And are standing on the sidewalk looking at the bail bonds sign across the street and need a cab. And tequila.
Posted by ronckytonk at 9:30 PM

Yikes. I guess due to the bash referenced below, I completely forgot your real anniversary. Apologies, but FELICITATIONS! anyway.
Hekuva year.