We hit a low point in the roadtrip on Wednesday night. I’d actually had a couple of low points already, when it was -6 degrees in Missouri and I slammed my finger in the door and when I got a ticket from a New Mexico state trooper for rolling through a stop sign in the middle of nowhere.

I’d gotten off the highway to switch drivers since I have poor depth perception in the dark. I turned into a dimly lit parking lot next to the highway and was surprised by red lights suddenly flashing through the rear window. The only light for miles were a few neon signs glowing from a bar’s windows, otherwise it was pitch dark. So no, I didn’t see a stop sign but hey I can fly back to Gallup to contest the ticket!

After I signed my ticket and got in the passenger seat, I started researching places for us to stay in Winslow, AZ. There were several options that looked okay but the more reviews I read that mentioned prostitution rings in the parking lots and blood stains on the walls made us reconsider and we decided to go to Holbrook, AZ instead. 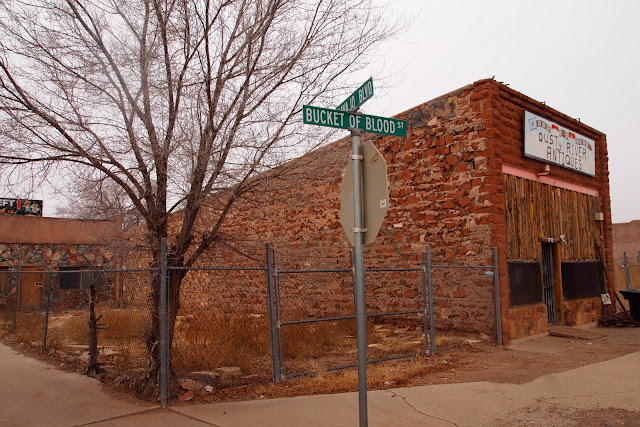 Distance-wise it made sense to drive to Flagstaff but we were going to the Two Guns ghost town in the morning and wanted a place east of there to stop. Holbrook it would be. We checked into the Holbrook Motel 6 and read online reviews about local restaurants but just confused ourselves so thought we’d drive around and stop for whatever looked good.

The restaurant was called Mr. Maesta's. It had an old-school Route 66 vibe and a sign that proclaimed the BEST FOOD IN TOWN! We chose it over Mexican, Italian, and Denny's because we wanted the BEST. The walls were covered with 1950's and 1960's memorabilia and there were bicycles, wagons, and apropos of nothing, an ironing board hanging from the ceiling. Matthew got a sketchy feeling as soon as we walked in but I waved it aside. He thought it was maybe the old man sitting behind the counter without a shirt on. That, and the fact that the place was empty. And that the waitress looked surprised to see us.

I really, really wanted a salad because I'd been eating road food for three days and Christmas cookies for two weeks. I thought a taco salad was a safe bet but I didn't bet on a burnt taco shell filled with just ground beef. There were a few shreds of cheddar cheese strewn over the top, pale wilting lettuce around the edges of the burnt shell and a plop of guacamole that had already gone brown.

Matthew and Elise didn't fare much better with their gristly tacos and stuffed tuna tomatoes and at one point Elise said something about her tomato that made me laugh so hard I started crying. I cried and laughed and they laughed and we couldn't stop. "It's like we're high," Elise said. "We don't even know what's so funny."

Two guys came in and sat at a table and we wanted to warn them to run but we were laughing too hard.