So last weekend. I spent most of it cursing the stuff I now own while at the same time wrapping it all up in cocoons of bubble wrap to make sure none of it breaks on the road. One night I dreamed that the bubble wrap roles were spinning down the street like tumbleweed and I imagined how many hundred of feet it would span if it were unrolled along the main drag in Oceanside. I think it was 700 feet.

All I've ever moved before are duffel bags and suitcases filled with books, clothes, and mementos. Now, even though we gave away two couches, two desks, a chair and a ton of smaller things, we filled three 6' x 7' x 8' U-Pack containers entirely with casserole dishes. How did THAT happen? Oh yeah, the registry. Curses. 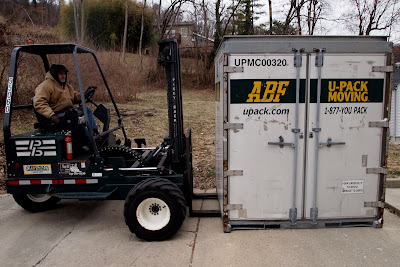 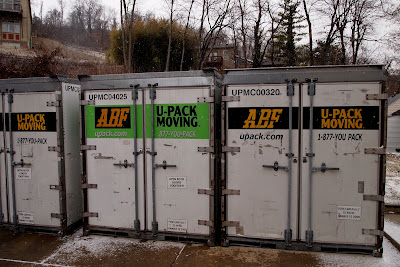 U-pack dropped off the containers on Friday, we packed and moved over the weekend with lots of help - thank you parents, Kevin, Evan, Mary Beth and Jeremy - and drove off on Monday after picking up Elise and wedging her into the backseat of the Honda Fit with the dog and the bonsai trees. We meet our stuff in California on Friday and I'm going to spend the next few days Googling casserole recipes so I can make something to eat as soon as we unpack.
Posted by ronckytonk at 12:49 AM