A few weeks ago, Matthew bought me a skateboard, my first skateboard. 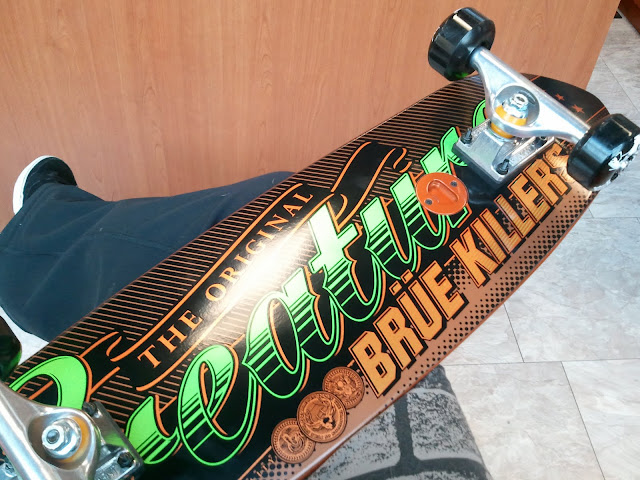 Look closely and you'll see the orange bottle opener on the bottom. Oh my god, drinking and skating. What a terrible idea! But try as I might to imagine cracking a non-alcoholic beverage with the opener, I keep seeing beer.

Matthew grew up skating and has picked it up again more now that we live in Oceanside where skate videos he watched as a kid were filmed. Not that we knew that before we moved, given that we didn't know ANYTHING. Everyone - with the exception of about five people, four now that I'm taking it up - skates here. The thok-thok of wheels on sidewalk cracks is a constant background noise. They skate alone, in pairs, in groups. I see people my age (sort of...I tend to think I'm younger than I really am) taking over sleepy Carlsbad streets, a roaming pack down the middle of the lane. 4-year-olds in helmets and knee pads scoot up the sidewalk on their first decks. They hold their arms out for balance and jump off into the grass when they get spooked.

I look at those pre-kindergarten kids and think, "Those are my people." I, too, hold out my arms and want to jump into the grass.

Matthew had mentioned several times that I should learn to skate. I'd murmur my assent and do nothing to make it happen. When he took matters into his own hands, the game slash pressure was on. The board is gorgeous and made for cruising - wide and with big wheels. I couldn't do a trick on it if I wanted to, which I do not. Since I find the slightest incline or shift in pavement height treacherous, all I want to do is get from A to B and not look like a total asshole.

Matthew gave me tips in a school parking lot one night after a cop kicked us out of the grocery store parking lot. His terse "No skateboarding here" spurred a surge of indignity on my part, the kind that most of my peers first experienced in 1991, not 2011. I wonder if I'm going to start saying things like "Do you smell bacon?" when I see police.

That night Matthew saw a plastic fork in my travel path and said something like, "Forks are your enemy!" which meant to get out of the fork's way. Since I don't yet have control per se, I rolled straight into and over it and crushed that fork like a gnat. Guess those bigger wheels are already coming in handy.

The only other time I paid attention to skating was one day back in the 80s when I borrowed a neighbor's board and spent the afternoon whizzing straight down the hill we lived on. There was the summer in 10th grade that I took photos of skaters on a half pipe they built in one of their backyards but I was more of an embarrassing friend-of-the-girlfriend and don't think that really counts. 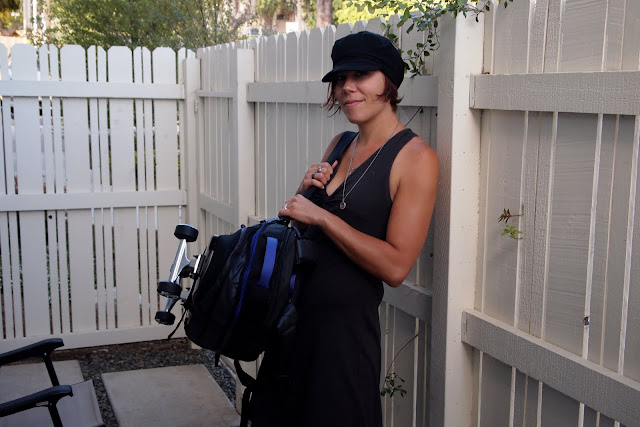 The other part of Matthew's plan is that I get comfortable skating on tour this summer. He facilitated this by finding a bag made specifically for skateboards, the Nike SB Shuttle bag. Dang it! This bag may actually end up being my biggest incentive of all. I can't CARRY A BAG EVERY SINGLE DAY MADE JUST FOR SKATEBOARDS and not know how to skate. If I don't scuff those wheels up, I'll be shamed.

The manager part of my brain is telling me that when I wipe out, it won't be covered by worker's comp. The other part is fine buying wrist guards, knowing I wouldn't ever skate backstage where there are lots of cable (talk about going from a bad to a worse idea). I'll skate on days off, away from venues, on my own time. I'll need to since apparently I'm being tested when I get home.
Posted by ronckytonk at 1:34 AM

Labels: are you f'in serious?, California, for yer consideration

Um.
Helmets are still a good idea.
Assuming you've fallen at least a few times in your life, do you instinctively try to catch yourself with your hands? Or are you disciplined enough to tuck and roll? If the former, those fingerless gloves would be a good thing to have. (Most folk use the heel of the hand.) If the latter, a thick jacket would be a plan.

Minor humor aside: Ya know the word verification tests we have to take for this? I like to pronounce them and do a word association with them. Mine right now is "cunphani." Need I say more?

Jess! Don't buy wrist guards or knee pads! I just washed mine in preparation for giving them to Mr. Vietnam Vets. I'll give them to you instead! I've been thinking my roller blade days are over since they've been gathering dust in the basement. How about some roller blades to go with the protective gear? Sorry I don't have a helmet to go with the package but that's a good idea, too.

Mom - thank you! I'll get those from you when I see you here.
Jim - I THINK I'm getting pretty good at jumping off the board when I need to. I definitely need to work on not sticking my hands out for when a fall does take me by surprise. I broke my wrist flying off my bike in college and know that it's no fun at all. Sounds like I should get fingerless gloves too, though. I'm going to need another bag for all my gear!