I knew that Top Gun was filmed in Oceanside and imagined riding my moped down the same stretch where Tom Cruise sped on his motorcycle. I heard that the bungalow where Kelly McGillis lived in the film was still around but I didn't know where, nor that I'd walked past it 25 times. Pacific Street looks different than in 1986 and the house itself is pretty haggard but it's hanging in there. 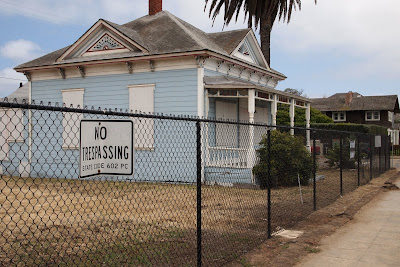 The newspaper said that it sits on land slated for development and that they're hoping to incorporate it into the plan. Please let it become a coffeehouse, cozy with sturdy wooden tables and a wine list. Please don't let it become a gift shop that sells puka shell necklaces and flip flops. That's all I ask for this house and its second chance. 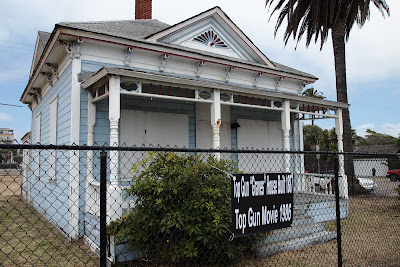 Top Gun made an impression on me when I re-watched it three years ago. It wasn't necessarily a GOOD impression but it stuck. I was crashing with Matt Sperling in LA and we had Top Gun night. I have no real idea why but we bought aviators and cut off our jeans in honor of the beach volleyball scene. We watched the movie and laughed and laughed some more. The homoerotic undertones we were oblivious to in elementary school, the overall sweatiness, the aggressive gum chewing.

A week later I was in Cincinnati visiting my family and met Matthew by accident. My cousin Mary Beth invited me to a pub quiz because she wanted to set Matthew up with her friend from school. I went too, a tag-along, because I happened to be in town and we named our quiz team Top Gun. Maybe that's why I continue to cling to the movie, because it was a part of the night that I met my husband. Maybe Top Gun bound us together that first evening in a way my reserved hard-to-get exterior didn't do on its own. 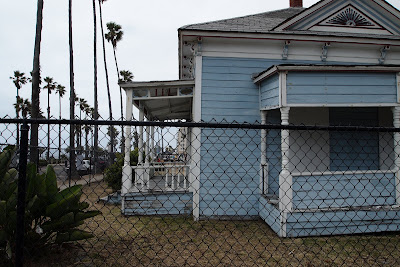 Fast forward three years to now. We have just made our first move together, to the town where Tom Cruise and Kelly McGillis lounged on wicker furniture that lazy late-80s Sunday, drinking wine and not sleeping together. In Quentin Tarantino's take on the film, the whole subplot of Top Gun is whether to be gay or not-gay? Give in to the gay or stay straight? After the movie date that culminates in the characters' not sleeping together, Quentin posits that Kelly goes butch for a scene (in the elevator, wearing a bomber jacket, hair pulled back in a baseball hat) to attract Tom to her and away from Val Kilmer. Quentin Tarantino's argument is, in my opinion, VERY CONVINCING. 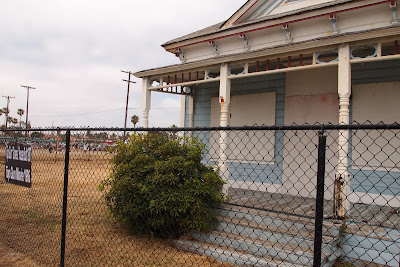 Top Gun came out 25 years ago and Oceanside celebrated over Memorial Day weekend. It was the last weekend I was home and I knew there were events but forgot because when I was making dinner and a fighter jet flew over my house, I almost shit the kitchen floor. I was slicing zucchini when I heard the noise, the noise that you hear right before fuselage busts through your roof and you are killed on impact. I froze with the knife in hand, my head vibrating. I stared at the front door, fully expecting to see the nose of a fiery jet. When that didn't happen, I snapped out of paralysis and craned my neck at the window.

"It's for Top Gun," Matthew said, figuring it out before me.

My hands felt shaky and my heart was clanging like a drum but I'm glad I didn't hit the floor and start crawling to the door, screaming, like my boss during the Seattle earthquake. THAT would have been embarrassing.
Posted by ronckytonk at 8:09 AM

Interesting Blog. Not the subjects - since I am 80 years old and thus not in your personal mental time space, but I like your writing and the fact that you do write.

I tried riding a skateboard once, borrowed it from a youngster on the street when I was about fifty. I could tell he was scared I would hurt myself, but I thought if I just pushed off confidently, I would be all right.

I wasn't, but I did learn that I might have gotten hurt pretty badly. So there's that.

Do you delete Spam like the one Librarian sent you in a comment? I get them all the time - usually from "anonymous". I delete them right away. I don't like them much. To me, it's like graffiti.

In a way, it's like somebody comes into your house univited and dirties up the place.

Looking into my motive for writing this, I guess what this comment is, is a passive agressive missile to "Librarian."

You may delete this one of mine also, if you wish. I will forgive.

Well Don, the funny thing is I'm actually married to the Librarian...

"Well Don, the funny thing is I'm actually married to the Librarian..."