I'm not a big skull-wearer. I think the last time I sported a skull was a tank top in 2006. In the 90s, I had some Day of the Dead jewelry from Mexico. Cathy just sent me a t-shirt, though, a hand-me-down from her friend Nicole's punk days, and it's my new favorite thing in the world to wear. Cathy said she thought maybe I wasn't skating because I don't have the RIGHT SHIRT.

I wore it today, not to skate but for a meeting. Skulls + business meeting = awesome. Cathy asked me to take a photo but I didn't do so until I got back to the hotel at the end of the day. I did text her earlier, "I look fucking formidable, like I will crush you with my bare hands if you don't obey. So that's always good."

When our production manager introduced me to the new lighting director he said, "This is Jess, our tour manager. She's got a mean right hook." I questioned that because I'm pretty sure he's never seen my right hook; I'm strong and can land a punch but hate hate HATE physical fighting. Graham, our production manager, played it off. "Maybe it was a dance move, at an end of tour party." It's possible.

This is the photo I sent Cathy. 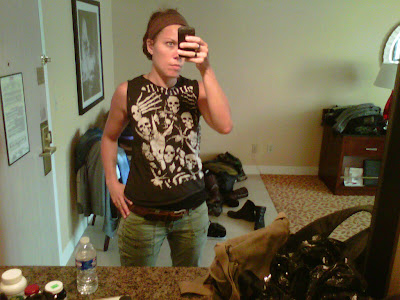 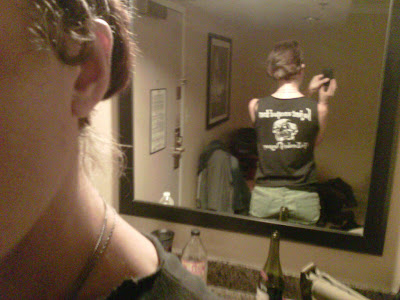 The thing that struck me throughout the day was how comfortable I was, mentally and physically. I wear all kinds of clothes: jeans, long skirts, pencil skirts, boots, sneakers, sometimes heels. But I've realized over time that two-and-a-half inches is my limit on heels because a) I am a giant already and b) I can't move around well in shoes higher than that.

My rule of thumb is if I'm chased by a killer, will I be able to run away? If my shoes cripple me, I won't wear them because I won't give the killer that advantage. Whereas in my new "I've just escaped from the London dungeon" shirt, I can jump on my board (theoretically) and skate away.
Posted by ronckytonk at 12:36 AM