I met Elinor when I was 11 years old. I'd just flown across the Atlantic Ocean and was uncertain in the strange land I entered. ENGLAND. I wore my banana yellow stretch pants on the plane but not my favorite New York sweatshirt because of the American flag on the back; we were afraid that I'd become a target for Gaddafi, were he lurking about Heathrow that day in 1986.

I was already homesick on the flight with my leader, Marti, and the other three kids from the American delegation to our CISV camp. By the time I was shown my squeaky metal bed in the school dormitory where I'd live for the next four weeks, tears were rolling down my face. Marti had asked our parents to write us a letter that we could open right away. I read the letter and the knot in my stomach twisted but I felt a little, tiny bit better.

There was so much to absorb. I was surrounded by 11-year-olds from Brazil, Iceland, Korea, Norway, Luxembourg, Germany, Sierra Leone, and England. There were a couple of 16-year-old "junior counselors" from Philadelphia and Sweden and a handful of staff members, my favorite of whom was an Englishman with curly red hair who was eventually nicknamed Strange Tony. It didn't take long to meet Elinor, one of the two English girls, who I remember in a tight bun, with a crooked smile and toes pointed out like a ballet dancer.

We were rapidly thrown into camp life and new routines. We had roommates and sang songs around a flagpole twice a day and at meals. Each country had a national night and presented their culture with dancing, food, and small gifts to take home. On American night, I got out my petticoat and grass skirt and demonstrated square dancing and Hawaiian dancing, NOT AT THE SAME TIME. Though if we had mixed those two dances together it would have indicated how hard it was to define American culture and how we were kind of making it up. Jen, the junior counselor from Philadelphia, wore Mickey Ears, a Mickey Mouse t-shirt, and a red skirt as her national costume. She was probably more honest than us.

I wasn't homesick anymore. We took day trips to castles, the North Sea, and to an amusement park where I went on my first rollercoaster, something I'd been afraid to do before. I created a dance routine to Madonna's Material Girl with the other American girl and we performed at the camp's talent show AND a local bar. We'd been split off into pairs to spend the weekend with families in Newcastle and my host family took us to their neighborhood squash club's bar. The only time I was at a bar in Ohio was when my mom's soccer team went for food after games and us kids were allowed to run around. This time I was showing off my MOVES under spinning multicolored lights and a parquet floor.

On the last night before we flew home, we all pulled our mattresses into the gymnasium and had a slumber party. We were crying and beside ourselves, beyond consolation. Of the almost 40 kids at our camp, Elinor was one of those I became closest to. I learned about the village she grew up in, Otley, in North Yorkshire. I'd spent a month in her country and now liked English sweets - Polo mints and Cadbury Flake. I drank tea with every meal. I laughed a lot in general and with her in particular. She was smart and thoughtful, never a mean girl.

For years afterwards, I wrote letters to the other campers. In time, my connection to some of them faded but Elinor and I were faithful writers. Into our teens we wrote regularly and joked that a letter of less than ten pages long showed a problem in our friendship, something like a lack of commitment. Fifteen pages, maybe even twenty, was more like it.

I saved my babysitting money and visited Elinor in England the summer before my senior year of high school. When I was 24 I saw her in England again and met Yohan, her husband. Around our mid-twenties, however, our friendship got lost in the shuffle. For a number of years we didn't check in, much less write long, meandering epistles beginning "Dearest Elinor" and "Dearest Jess". At some point I searched for her online and found her email. And then Facebook happened.

Right around my wedding last year and just before I left for tour, I got a gift from her: a journal, a silver ring and a letter. On a day off in Toronto, I sat in a coffeeshop and wrote back. It felt good to write a letter. With a pen! Like in the olden days! It was a rusty process and it took awhile to get my thoughts flowing but I did it. And the feeling of weighing words before putting them to paper, of the pen in hand, and even of the metal flap of the mailbox snapping shut is rewarding. Almost as thrilling as seeing a letter that someone has taken the time to write to me.

I got a letter from Elinor last week. She sent it to my parents' house, she knows how often I move. She included photos of her toddler, threw in a sly reference to her maternity leave for baby 2, and made a casual remark to the fact that we've been writing letters to each other for TWENTY FIVE YEARS. And I don't care how far technology takes us in the next twenty five, when email may seem obsolete and archaic, I hope I'm still writing letters. I appreciate their weight. 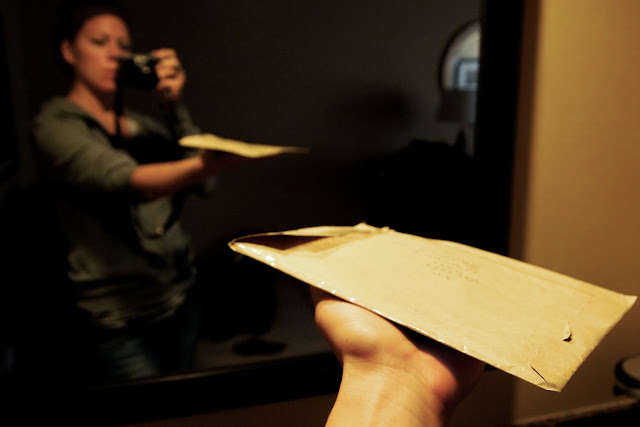 Posted by ronckytonk at 9:12 AM

Searched the web for CISVers from Newcastle 1986 and found your blog. Hope you are doing well!

Anders - the JC from Sweden

Anders! How are you after all these years? Did you find any of the other CISVers from our camp? xx