The things I learn on walks

I've been on a lot of long walks this week. Some were to escape the house because there's nothing like sitting in the living room looking at the guy who just broke up with you. Other walks were to do errands or just to enjoy being outside, moving around. The longest was ten miles and was kind of an accident.

I turned down a ride home from West Hollywood because I wasn't in a rush and thought maybe I'd find a bus to hop on. Ha. What I did find was that Beverly and La Cienega is NOT CLOSE to my old house in Atwater Village. And that my heavy Frye belted mules, while great for kicking shit and totally comfortable when you're not training for a triathalon, aren't really made for walking ten miles.
The good news is that I now have a new map of streets in my head and know new things. Like where to find Korean people! And public restrooms. 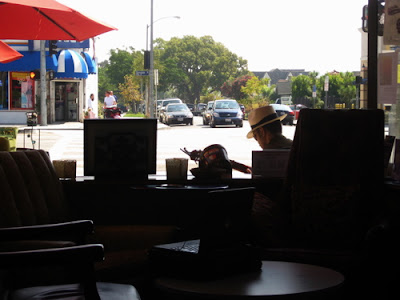 One day I rode my bike to Kaldi coffeeshop.

This guy was playing his guitar outside and he didn't bother me at all so I think I'm finally over my irritation with boys and their guitars. That phase was born out of my time at Evergreen where every boy on campus had a guitar slung over his shoulder. Half of the boys, when they weren't pontificating on the psychotropic properties of their favorite drugs, were singing songs about revolutions that had nothing to do with them. Agh.

Anyhow, I rode my bike to my new storage space, dropped it off, and walked to Griffith Park. Where I saw THIS GUY and I really dig this guy. 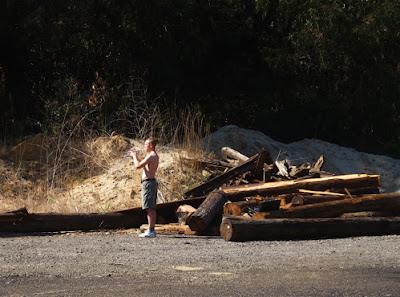 Unlike hipster fedora guy at the coffeeshop, this guy shunned the public and found a gravely secluded lot. He took off his shirt and was trumpeting away when I came walking by. I didn't ask any questions so I don't know his story. Maybe he lives in an apartment and has been getting complaints. Maybe he wants a tan and a hobby. Whatever his reason, I like it.
Posted by ronckytonk at 5:54 PM