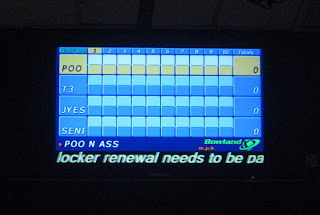 When I got back to LA from Mexico, I went bowling.

Matt and Lindsay picked me up from home and the three of us drove to rescue T3 from the hotel where he is staying for the next few weeks. We went to Pickwick Bowl.

As soon as we all put on our bowling shoes, I knew something was up. Three of us looked like awkward ducks flapping around but Matt appeared SUPER comfortable, like he was entering a zone I wasn't familiar with.

We had a brief discussion about how every alterna-teen wears bowling shoes to school at some point. Someone thought I probably had bowling shoes in high school. I didn't, but Sunny did. I looked at Matt, reclined in the hard plastic bucket seat, one leg crossed over knee, fingers latticed behind his head.

"No," he replied. "I just played a lot as a kid. And I watched a lot of bowling with my mom when I was home sick from school."

"You came here when you were sick?"

"Yeah. My mom wheeled me in a gurney to the alley in my pajamas."

As Jocardo would say, SARCASM NOTED AND FILED IN TRIPLICATE, MATTHEW SPERLING.

He continued, "We watched it on TV."

Matt got the game going and typed our nicknames on the screen, christening himself POO N ASS. 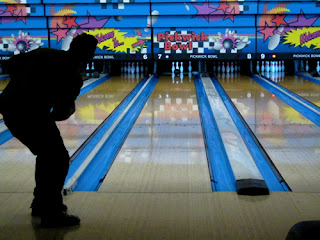 PNA was up first and he elegantly hurled the ball down the lane at 23 mph and didn't get a strike but smashed all the pins on the second try.

PNA would get several strikes later, in between scarfing onion rings and giving me advice on how NOT to throw every ball into the right corner. Sometimes I was lucky enough to flick off the outside pin. 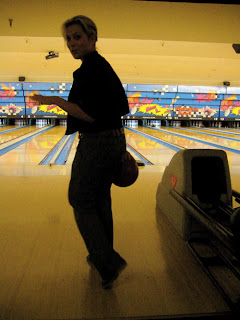 Lindsay, on the hand, was nonchalant. Lindsay would stand up, pick a ball, and sidle into position while making self-deprecating noises. Then she'd gently roll the ball away at 8 mph and somehow hit EVERY FUCKEN PIN.

Oh, look what I did. Shrug.

Lindsay and I both struggled with endurance and played notably better in the first game than the second. I know my excuse was partially that my right arm was numb from trying to bowl with balls that I could hardly pick up. I suspect Lindsay was just tired of being so casual about her gift for the game. 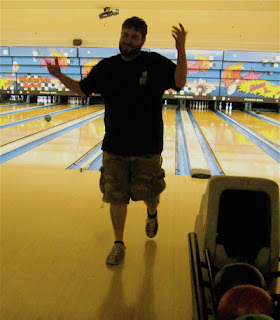 Speaking of casual, here is T throwing up his arms in an "Oh well, I tried," move.

The last time I checked, your bowling score was FOUR TIMES HIGHER than mine.
Posted by ronckytonk at 6:33 PM