Bob got the glory 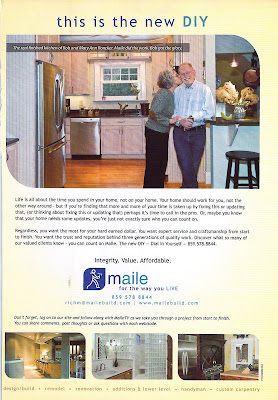 The kitchen of Bob and Mary Ann Roncker. Maile did the work. BOB GOT THE GLORY.

I'd heard about this photo. Mom told me a while back that there was some official photo taken of her kissing dad's cheek in their new kitchen and I responded by making a very mature gagging noise.

She said it was for Cincinnati Magazine and I thought it was an article for the home section or something. Yesterday I did laundry at their house and she whipped this out. It's an ad for the company who recently redid their kitchen.

I studied it. "So, mom, why are you kissing his cheek?"

"Did dad pay for the kitchen?" I wondered.

"So you're just happy about it in general," I said. "You're not, like, thanking him?"

"It's advertising," she replied. "This sells with, you know, the older set."

A-ha. What I find funny about this picture, besides the fact that mom's sweater has elbow patches (LOVE THAT) and the random green banana on the counter next to my dad is that he looks so pleased with the situation, like he's thinking, "Yeah, I got it. You know what I'm talking about...THE GLORY."

Which is not at all his personality.

More likely, mom told him one day that the kitchen should be redone and he had just come back from a run or woken up from a nap and was like, "Wha?" And "That sounds nice, honey," and then she did it. I'm not saying he didn't have input and they weren't a team about it but glory on his part might be pushing it.
Posted by ronckytonk at 2:18 PM

Jess,
Don't you think that the true version of the story could be that Mom pleaded for a new kitchen and I wrote a check and deposited it in her allowance account so she could be happy?
Dad

I thought the same thing when I saw that lone banana but didn't want to admit it. I think the company photoshopped it in to make it a sexy ad.

i thought that was an ad for cialis.

LOVE the new DIY! I DIY my dinner every night. I also occasionally DIY window and house cleaning. I love it--I'm finally DIY, yo!