Jocardo recently asked me where I was going to work on the computer and I said, "The cafe up the street."

I thought for a minute and told him, "Reality Tuesday."

I also told him that though I've lived here for five months and pass the cafe almost every day, I have a hard time remembering its name. It has no ring to it.

"I like it there," I said. "People are nice, there are outlets for laptops and good chairs but I usually find it easier to call it THE CAFE UP THE STREET YOU KNOW THE ONE BY SNAPPY TOMATO PIZZA."

On and on we complained about why they called it that and how we don't like cute names like Shear Madness for barber shops but at least you remember it and we ranted against alternative spellings and then finally shut up.

Jocardo then did some research and sent me an email:

The cafe was started in order to attract the young adult population to an alternative Christian scene. It was an idea born out of a Tuesday evening Bible study group that has evolved into a reality.

Later I text Jocardo and ask for his address and he sends it back to me and said "We've been friends for how long and you still don't know my address?" 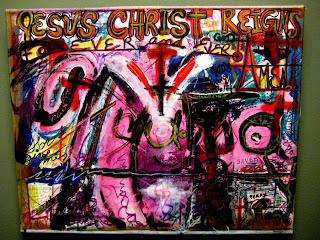 I could have been sarcastic back but chose instead to write, "You almost sound sincere and now that I know I go to a Christian cafe, I am sensitive to that."

I am also more sensitive to the Jesus art in the bathroom that I never noticed before because I was too busy being psyched that the cafe's so clean. Apparently I am more concerned with hepatitis than God when it comes to my coffeeshop.
Posted by ronckytonk at 4:35 PM

of the two, hepatitis is more dangerous.

Remember, Just Say No To the Kool-Aid, peer pressure sucks and if Jesus saves why is this small coffee two bucks and 35 cents? Jesus must not have saved a lot buying coffee or paying for braclets! What Would Jesus Do? Not pay too much for his car insurance!