The art of not feeling dead

I just read a book that did something exquisite. It explained to me what I experience.

This is not to say that I agreed with everything that Curtis White wrote in The Middle Mind: Why Americans Don't Think for Themselves but I appreciated his views because they were well-argued.

He forced me to tweak my thinking about cultural standards (academia, work), artful diversions (music, literature, and theater), and media (radio, television, internet).

I had to put the book down a lot and stare at the wall. When I'd realize what I was doing, I'd grab a pen and make a note somewhere. Or I'd just underline furiously and snicker because Curtis White's opinions tend to be aggressive.

He relishes dissing people who are almost institutions themselves and he doesn't hesitate to verbally flay them for lacking imagination, justice, freedom, and creativity.

In short, Curtis White is not afraid to burn a bridge.

The most lucid bottom line that Mr. White illustrated for me was the difference between feeling alive and feeling dead. The I GET IT sensation when reading his take on feeling alive versus feeling dead is related to the fact that when I'm mentally energized I tend to say to myself "I'm ALIVE" and write in my journals "I'm ALIVE I'm ALIVE" as if this somehow isn't obvious.

Yeah, I'm alive. My heart's been beating continuously for awhile now - not in dispute - so what I'm referring to is about more intuitive feeling.

- When I try to tie together a bunch of ideas and don't know if I'm making any sense, I feel alive.

- When I take a job with a publishing company, end up in the Marketing/Publicity department, and spend all my time thinking about sales and promoting other people's ideas instead of working on my own which was the reason that I wanted to work with literature and EVEN THOUGH I SHOULD BE HAPPY to have even found a job in New York where I have a lot of responsibility and can wear whatever I want and cuss like an infidel in meetings, I (eventually) feel dead.

- When I am surprised, I feel alive.

- When I go for the easy and predictable question, analysis, or response, I feel dead.

- When I experience art that makes me question everything, I feel alive.

- When I work closely with people and my work might help someone or something improve, I feel alive.

- When I hear debates about party politics and the differences between Democrats and Republicans, I feel dead.

- When I consider going to a really expensive grad school to learn a skill doing something I wouldn't love out of terror that I might never have a stable income, I feel dead.

- When I consider going to a really expensive grad school to learn a skill doing something I love and might never make a ton of money at, I feel alive.

- When adults play in public and don't give a shit if they look like jackasses, I feel alive.

Notice that not all of the alives are comfortable. 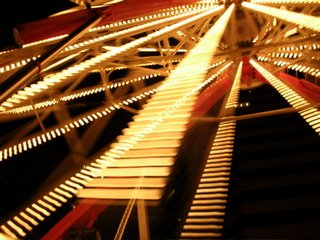 Posted by ronckytonk at 6:16 PM

HI IM DANILO FROM THE PHILIPPINES YOU GOT A VERY NICE AND GREAT BLOG, VERY INTERESTING... BY THE CHECK MY BLOG AS WELL : www.danilomalaga.blogspot.com and www.danilo2.blogspot.com

Hey! CW is a professor at the university where I did my undergrad and grad. The Middle Mind is certainly intriguing. I also liked, for pure pleasure, Memories of My Father Watching TV.